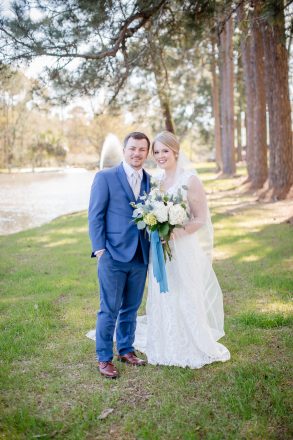 The bride is the granddaughter of the late Barbara and Charles Tennille of Bainbridge and the late Willie Ree and Wilkin Hutchins of Donalsonville.

She graduated from Deerfield Windsor Academy in 2012 and holds MSN, RN and FNP  degrees in Nursing from Georgia Southwestern State University. She is employed as a RN on the Mother/Baby unit at Phoebe Putney Hospital.

The groom is the son of Tim White of Shellman, the late Teresa Lynn White of Fort Gaines and step-son of Debbie Jackson White. His grandparents are Mrs. Johnie Williams and the late Herman Williams of Abbeville, Ala and the late Melba and Jones Brady of Coleman, Ga.

He graduated from Randolph Southern Academy in 2011 and served four years in the U.S. Marine Corps Infantry Division.

Mr. White is currently farming and pursuing an online degree in Crop and Soil Science from Oregon State University.

The couple was united in marriage on March 7, 2020 at Gin Creek Vineyard in Moultrie, in a service performed by Rev. Scott Stanfill of Colquitt United Methodist Church. The bridal attendants were: Abbie Hutchins, sister of the bride, as Maid of Honor, Elizabeth Moncrief, Alaini Venable, Brooks Pace, Abby Kite and Rachel Harrod.

The groom was attended by his father, Tim White, who served as Best Man, and groomsmen were: Matt White, Jack Callaway, Davin Whatley and Chris Covar.

Miss Katie Harrell and Drew Kelley, both of Bainbridge, Ga., are announcing their engagement and upcoming wedding. The bride-elect is... read more