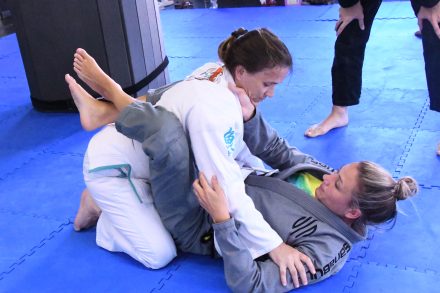 After years of training, traveling and teaching jiu jitsu, Michael Connell’s dreams finally came true on Wednesday when he held a ribbon cutting for his own Jiu Jitsu academy, Port City Jiu Jitsu.

Connell first became interested in Jiu Jitsu back in 2010 when his friend traveled to California to train in mixed martial arts. Connell said when his friend returned he showed him the art of Jiu Jitsu and they would fight against each other. Connell fell in love with the hobby, but realized nowhere in Bainbridge offered it. He then started seeking the nearest location and found a Jiu Jitsu location in Tallahassee.

He began driving back and forth to train several days a week, while still living in Bainbridge and managing a paint store.

As much as Connell enjoyed his job, his want and desire to train full time in Jiu Jitsu kept building. He then decided it was time to take a leap of faith and quit his job, cash in his retirement and move to Macon to train full time.

During his time in Macon, Connell began training six hours a day. He said he would train three hours in the morning and three hours at night to fast track his knowledge, so he could one day bring it back home to Bainbridge.

After two years of training in Macon, Connell’s wife received a job offer in Panama City Beach. They then moved there, where Connell found a new training center.

During his time in Panama City Beach, Connell’s coach saw his passion and offered him a teaching position, while he still trained.

Connell was thrilled and eventually became a partner at the gym. He said he had his own section and was training people daily in the art of Jiu Jitsu.

While working and training there, Hurricane Michael hit and ruined the studio.

Connell was devastated, but then thought it might be a good time to bring Jiu Jitsu back to Bainbridge like he had envisioned all along.

He first opened in a metal building out in the country, but soon business was booming and Connell knew he needed a bigger location. He set his sight on downtown and found a home at 327 E. Water Street.

Connell believes the business took off because it was new to the area, but at the same time the UFC has gained in popularity and spiked the interest.

“When people found out this was opening up, especially in the South… it led to a lot of popularity,” Connell said. “For so long there have been activities for kids, but this is something adults can do and get active in as well.”

Connell offers classes to kids and adults, along with private sessions.

On Mondays, Thursdays and Sundays, adult classes for ages 13 and up are offered.

Monday classes begin at 6 p.m. and are gi Jiu Jitsu, meaning a robe with a belt is required. They teach you in the class how to use that clothing against competitors in competition.

Thursday classes are also at 6 p.m., but are no gi, meaning only shorts and a rash guard are required.

Kids classes for ages 6-13 are offered on Tuesdays and Thursdays at 5 p.m.

Private lessons are scheduled on an as needed basis. Connell understands some people may be brand new and want some training before they enter a class setting, or some people may just want that one-on-one training and he encourages people to reach out.

Connell is excited to begin working with everyone. He has had between 20-40 adults already show interest, especially women. He said this is the most women he’s ever trained.

He looks forward to time slowing down soon and being able to take those in training to competitions in Atlanta and Columbus and showing the control his students have learned.

Friday afternoon a fatal shooting occurred just before 2 p.m. on the 800 block of College Street, where Alfred Lee... read more