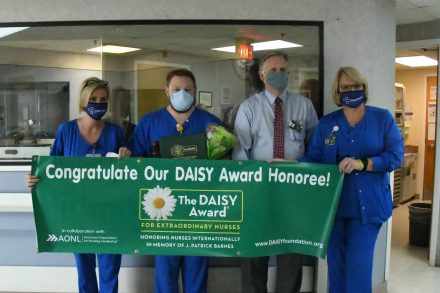 Memorial Hospital and Manor ER nurse, Jared Thames was in for a surprise on Wednesday when he was awarded the Daisy Award.

Thames was called in under the guise of needing additional day shift workers, however his supervisor and coworkers really were prepping to surprise him.

As Thames began clocking in, Lori Eubanks, RN CNO asked everyone to come to the front; she explained she wanted to speak with them.

As everyone gathered, it became obvious a surprise was in store.

Eubanks told everyone that each quarter they choose an honoree for The Daisy Award for extraordinary nurses. The award honors the “super human work nurses do for patients and families, every day whenever they are in practice.”

Eubanks said this quarter, they received three nominees, but had narrowed it down to one, after receiving a letter from a patient, detailing the kindness Thames showed them.

Eubanks read the letter to all the nurses, which was when Thames realized he was the winner of this quarter’s award.

Thames was then presented with a certificate of recognition, a Daisy Award pin to wear on his scrubs, a Healer’s Touch Sculpture and of course, a fresh arrangement of daisies.

In addition to this, Thames also can qualify to join the Daisy Medical Mission Grant and receives a special tuition rate to Chamberlain University to continue and further his nursing education, if he desires.

Once he received his award, Thames was officially pinned and celebrated by his coworkers and superiors with a party in the break room.

There is no doubt why Leverett Dental has had 55 years of successful business in Decatur County!   Outside of... read more