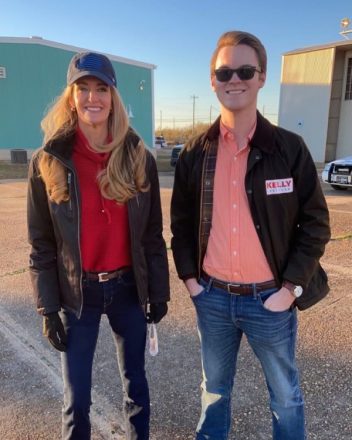 Clay Wells (right) attended Kelly Loeffler’s Firewall Tour with his dad, Jay Wells and had the opportunity to grab a picture afterward.

Senator Kelly Loeffler appeared in front of a large crowd of supporters on Saturday, December 26 at the restored World War II hangar at the Decatur County Industrial Airport to campaign for the runoff election, where she faces Democratic opponent, Rafael Warnock.

Past President of Georgia Farm Bureau, Gerald Long, welcomed Loeffler to Bainbridge and spoke to the crowd on her behalf. Long praised Loeffler for her leadership while advocating for agriculture in Washington, before local business owner, Jay Wells took the stage.

Wells, who is on the Georgia Board of Economic Development, encouraged the crowd to vote early and reminded them of the commitment the “Greatest Generation” had displayed eight decades earlier on the old airbase, where the event was held. Wells told them the challenges the community is facing today are similar to the challenges faced back then in many ways, and Loeffler can help with those challenges.

Following Wells’ address, long- term and recently re-elected State Representative Darlene Taylor took the stage and reiterated Wells’ reminder to vote early before speaking on the great job Loeffler had done in the Senate this past year.

Upon the conclusion of Taylor’s speech, she introduced Loeffler, who was met with thunderous applause.

Loeffler spoke of her childhood, growing up on a farm, waitressing her way through college and now living the American Dream, a dream she believes should be available to all Americans.
Living the dream comes with challenges, though.

Loeffler discussed the challenges she faced as a Senator dealing with Democratic pork loaded legislation, such as the new economic stimulus package that contained vital things for the American people, while other things in the package were a waste.

She urged spectators to please vote for her. Because, despite the challenges she faces, with the help of David Perdue they can create a firewall to protect America from socialism.

Concluding her request, Loeffler was applauded and remained afterward to speak with attendees, answer questions and take photographs with members of the audience.

The runoff election will take place on January 5, 2021.

Thursday, December 17, the Decatur County Board of Education held their December Board meeting, where they approved a resolution that... read more