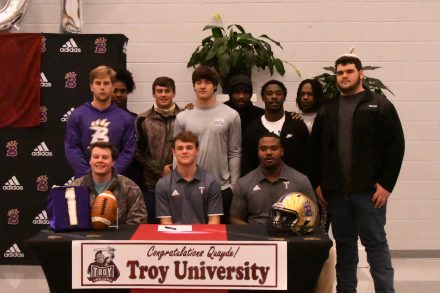 Members of the Bearcat football team smile with Quayde Hawkins and Lawson Chandler after the two signed their letters of intent with Troy University.

Head Coach Jeff Littleton opened up the signing ceremony by welcoming everyone and acknowledging the accomplishments made by Chandler and Hawkins.

“They’ve both accomplished a lot in their time here at Bainbridge High School,” he said. “But, most of all we want to talk about their accomplishments in the classroom that got them to the point they are at now and more than that what great persons they are.”

Littleton pointed out that both young men were captains of the football team and had upstanding character, while maintaining their grades in the classroom that allowed them to play at a Division one school.

Following Littleton’s welcome, Hawkins and Chandler thanked their coaches and teachers for getting them to this point and supporting them along the way.

Hawkins and Chandler then took their seat and signed their letter of intent to play.

Chandler expressed his excitement about his future attending Troy.

“When I found Troy, I found another home,” Chandler said. “It reminded me so much of Bainbridge and my roots are so deep here in South Georgia and I believe I will return here and Troy is near here so I fell in love with it.”

Chandler said he believes he will be playing the position of right guard during his freshman year at Troy.

When it comes to what he will take with him, Chandler said being a Bearcat taught him how to be a man most importantly, but also taught self-respect, which he knows will be important in the long run.

Offensive Lineman Coach Ryan Kineard could not be more proud of Chandler for his dedication to the team the past four years and his future at Troy.

“I am just as happy seeing him sign with the school he loves as I would be my own three kids,” Kineard said. “I love him like he’s my own son and I’m happy to see him happy.”

Hawkins echoed Chandler’s statements about why he chose Troy.

“It (Troy) felt like the best fit for me,” Hawkins said. “It felt like family over there and had a small town feel.”

Hawkins plans on playing Quarterback at Troy, but said he knows they have a lot of Quarterbacks on their roster currently.

However, he believes he is the only Quarterback they signed in the 2022 class.

“I’m going to have to fight for my position wherever I go,” he said.

Hawkins said the hard work required to fight for his position is something he learned as a Bearcat.

Hawkins is excited to begin training, but also play with Chandler.

“We’ve grown up together and it’s nice to have someone familiar when I get over there,” Hawkins said.

Hawkins’ mother, Lea was ecstatic on Wednesday to see her son’s hard work finally pay off.

“I’m so excited,” she said. “This is what he’s been working toward his whole life.”

Lea said Quayde has been playing football since he was 5-years old. She said she never had to push him to play, however she and her husband always thought he would go to college to play baseball.

“All of a sudden football became the sport for him,” she said.

“We are super proud of him and Troy is a great fit; I think he is going to enjoy himself,” he finished.