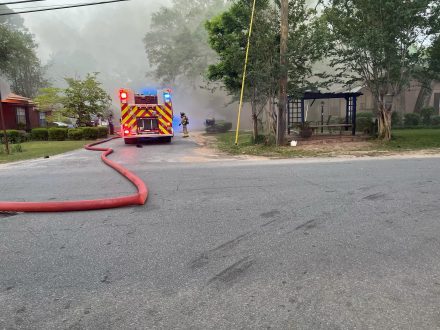 A huge cloud of smoke rose as BPS and DCFR extinguished a structure fire Monday.

On Monday May 3, Bainbridge Public Safety was dispatched to a structure fire on the 500 block of East Pine Street.

There, BPS engineers found the fire located in the hallway and attic space of the structure. Due to the harsh fire conditions and minimal visibility Fire Chief Doyle Welch requested backup from Decatur County Fire and Rescue.

With the help of DCFR, BPS sprayed down the interior until smoke was no longer visible and then began salvage and overhaul.

As BPS began to investigate the cause of the fire, they found that a generator was located in the back seat of a 2004 Ford Expedition. The generator had wires plugged into it that were coming from the sunroof of the vehicle.

Welch ran the vehicle and found it was registered to the property owner, David Washington.

Welch then spoke with Washington to ask why he had wired the generator to the electrical panel box.

Washington informed Welch that Georgia Power had disconnected his electrical service due to his past due bill of $7,000.

Washington had been renting out rooms in his property, though and knew he had to provide power to his tenants. He did so through this generator.

Welch advised Washington that renting rooms is not allowed. He also informed him the wiring of the electrical panel and the generator connection were illegal and weren’t installed to the current electrical code.

Luckily, none of Washington’s tenants were injured.

It is reported he, along with a couple and an elderly woman were living in the residence. However, occupants of the home are currently receiving assistance from the Red Cross.

Welch said infractions like these can be really difficult to catch, unless someone reports it.

If the fire had not happened, BPS never would’ve known about the illegal tenants and conditions they were living in.

Welch is still investigating the cause of origin and ignition of the fire at this time.