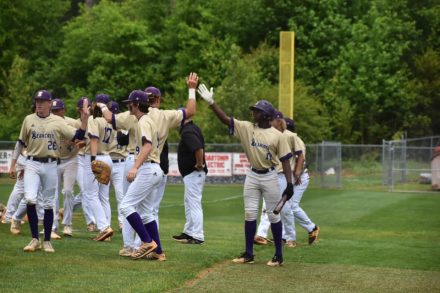 Players high five teammate, Bo Smith after he knocked in two home-runs against the Cedartown Bulldogs.

Following a rain delay on Monday afternoon, the Bainbridge Bearcats baseball team returned to Cedartown on Tuesday to face off against the Bulldogs in a doubleheader for a chance to advance to the Final Four against Marist.

The Bearcats brought in a run in the first inning of the game.

Senior Colton Harrell singled, before Will Beckham was hit by a pitch.

Nolan Barr then stepped up to the plate, doubling and scoring Harrell.

With the Bearcats up by one run, neither team scored in the second inning. However, the Bearcats got back on the scoreboard in the top of the third.

Harrell was hit by a pitch before Barr singled.

Senior Jackson McCullough then singled, scoring Harrell and giving the Bearcats a 2-0 lead.

The Bulldogs attempted to make a comeback, bringing in one run during the bottom of the third inning.

They then tied up the scoreboard in the bottom of the fourth.

The Bulldogs then took the lead in the bottom of the fifth, but the Bearcats continued to fight like they have all season.

The Bearcats tied up the game again 3-3 in the top of the sixth.

Senior Quayde Hawkins then stepped up to bat, singling and scoring Smith.

With no time to spare, the Bearcats pulled ahead for good in the top of the seventh inning, scoring three runs.

The inning started with two up, two down. Smith then singled before Godwin and Connor Poitevint were walked.

This last RBI made the final score 6-3 with Dewey Brock earning the win for the Bearcats.

Brock surrendered three runs on four hits over seven innings, striking out two and walking one.

“It was the closest game we’ve had so far in the playoffs,” Head Coach Donnie Coxwell said. “But, we did what we do. We played defense, we hit the ball and just continued to play our game that we have all season.”

Following a quick break, the Bearcats returned to the diamond to face the Bulldogs one last time in hopes of advancing to the semifinals.

The Bearcats were still hot at the bat, scoring one run in the bottom of the first inning.

Hawkins and Harrell were both walked before Beckham hit a sacrifice fly, allowing Hawkins to score.

Smith was on fire in the bottom of the second inning, homering on a line drive to left field.

The Bulldogs finally got on the board in the top of the third inning, scoring one run.

However, going into the bottom of the fourth, the Bearcats proved they couldn’t be reckoned with.

Beckham singled as his courtesy runner Josh Beachem stepped in for him. Barr then doubled before Smith homered again, giving the Bearcats a 5-1 lead.

Godwin then singled and was brought home by Conder, who singled.

The Bulldogs scored again in the top of the sixth, but it was no match for the Bearcats, who scored another two runs in the bottom of the sixth.

Smith began the inning with a single, before Conder and Hawkins were walked. Harrell then singled, scoring both Smith and Conder.

The Bulldogs scored two more runs in the final inning of the game, bringing the score to 4-8. Their loss allowed the Bearcats to punch their ticket to the Final Four.

The Bearcats will now play Marist, but according to Coxwell, the team isn’t saying the “M Word.”

“As far as we’re concerned, they’re the blue team,” he said. “No one gets to the Final Four by accident; the challenge gets harder every time.”

The Blue Team has had a successful season thus far, knocking out the Bearcats in both football and tennis, but the baseball team is determined to put a stop to that.

“We’re silently confident,” Coxwell said. “To get to this point, our guys had to have some confidence, we’re not scared of the challenge… it’s the blue team, but so what?”

While the team isn’t scared, Coxwell admitted it is nerve-wracking knowing they will be the visiting team and have to travel again.

However, all of the pitchers are ready. Coxwell said all of the players who typically pitch want this opportunity and want the ball.

Most of all, Coxwell said everyone is excited.

“We’re excited,” he said. “We’ve never been this far before and we appreciate everyone who has supported us this season.”

The NFHS network will be showing the game live on Saturday for fans who cannot attend.