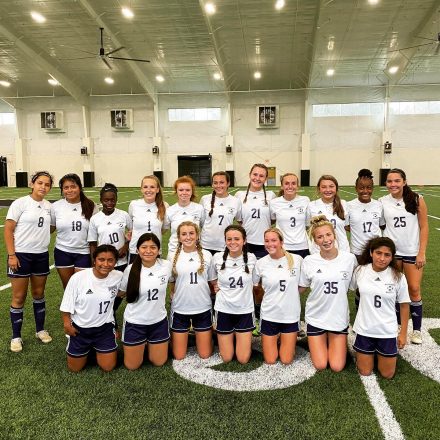 The BHS Girls Varsity Soccer Team has been playing scrimmages this summer, winning their most recent one.

While school may be out for summer, the game is still on for the Bainbridge High School Varsity Girls soccer team, who won 4-1 in an off-season scrimmage game against Colquitt County last week.

Upcoming senior Nathaly Rodriguez scored twice, followed by Addison Hill, upcoming freshman, who also scored twice. As it was an off-season game, stats for all the players were not strictly kept.

This summer marks the first time the girls have practiced and played during the off-season, having already played Lowndes twice this month.

“To be competitive in high school sports, if you want to be on the upper echelon, you have to do stuff in the off-season,” Coach Brian Hill told the Post-Searchlight. According to him, there are about 20 girls participating in the off-season program, with nine regular players returning. Work-outs have been held throughout June, three days a week.

Hill is serious about his ambition to make the Varsity Girls a major contender.

“I want to be a quality program, and a competitive program, not just around here, but at the state level as well, and in order to do that, it takes a lot of hard work, commitment,” he said.

Other high schools in the area, such as Tift, have been doing similar off-season training programs, before BHS this year. This summer has seen the girls work on the fundamentals of soccer.

Getting better at handling the ball and completing drills were just a few of the things the team worked on.

“For the workouts that we did, we’ve had a good turnout, and we’ve been able to compete at a higher level,” Hill said. “Hopefully, we can keep getting better, and when people think of Bainbridge soccer, they look at it as a challenge when they go to play us.”

For next month, the girls are scheduled to face off against Tifton twice, and play a rematch against Colquitt.