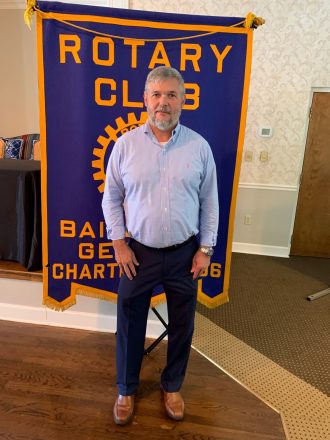 BDCRA Director Joel Holmes smiles after speaking at Rotary Club about some of the activities offered.

Joel Holmes, the new director of the Bainbridge-Decatur County Recreation Authority since January, spoke to Rotary this week and updated the activities and sports events available there.

Holmes, a native of Rome, Ga., graduated from Georgia Southern University with a major in sports management. He came to Bainbridge after 6-1/2 years as the recreational director in Albany, and he brings a total of 22 years’ experience in the field.

He said he was attracted to accept the job in Bainbridge as he had attended several events here over the years and always liked the town.

He gave an update on the activities planned for the year, beginning with youth football, cheerleading and soccer, taking place now. Along in November they move on into youth basketball, along with adult flag football. Then hitting the spring with youth baseball, tee ball and soccer. In the summer there will be an adult co-ed softball program.

Something new beginning this year is a special needs kickball program. “When I arrived here I realized there were no programs offered for the special needs population, and we are going to reach out to them for a recreation program also. That is very important to us.”

Also something else starting is a traveling team program in baseball and softball. Travel teams are really hurting regulation teams across the country, resulting in lower numbers on those teams, yet people are paying from $1000 to $1500 to play travel ball.

“We have decided to join them. We are starting our own travel softball and baseball leagues. We have two staff members, one who played college baseball and one who played softball. At the facility we have now we have enough fields there to offer travel tournaments ourselves and make enough revenue to support it.”

There is also a new tennis director overseeing that year-round program. He comes here from Texas and is described by Holmes as a well rounded athlete in other sports as well.

Holmes noted a couple of other improvements made – some to outdated equipment, and filling some short staff positions.

He described the makeup of the authority as having three members appointed by the city manager and three from the county commission. He also expressed confidence that the new budget adopted in July is sufficient to provide the services planned. He also advised they are accepting sponsorships from businesses and organizations. For $3oo a company can sponsor a team.

He invites all to check out the Authority on social media as to details on all sports programs available.