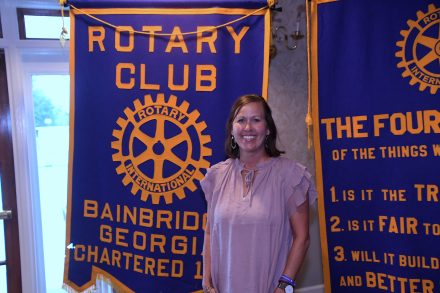 DDA Director Amanda Glover smiles after presenting Rotary Club with all the projects that have been completed over the years.

The Bainbridge Rotary club gathered at the Bainbridge Country Club Tuesday for their regularly scheduled meeting. Amanda Glover with the Downtown Development Authority was the speaker, and discussed the history of the Authority’s various projects over the years.

“I stepped right in when the Bon Air hotel project was in the stages of demolition,” Glover said of her own involvement with the Authority. “I got my feet wet real quick and learned what downtown redevelopment is all about.”

She went on to discuss other projects, such as the Water Street development properties, which provided the city with the seed money to acquire future properties. According to Glover, the city was concerned many of the properties they had acquired were too far-gone.

“A lot of the ones that we acquired, the back wall was about to collapse, the roof was about to cave in,” she said. “But we showed the interest and the investment in what we believed was important and valuable, and we’ve been able to sell those properties.”

“A lot of times, private investment follows public investment. They want to be able to see if what we’re investing in is important, so they can invest their dollars wisely for the future.” She went on to discuss the investments and developments that have occurred so far this year, which include: 11 new businesses have opened, which created 72 new jobs; 11 properties were sold for a total of $1.3 million; six private development projects are to be completed, resulting in an investment of $2.2 million; five public improvement projects; and no businesses have closed this year so far, with more still yet to open.

“We want to create the place where people want to come,” Glover said. “A place to gather, socialize, to see their old family and friends… and so, for all these last 30 years, that’s what it’s all about, bringing the community together, both on the public and the private side, working together, and creating a great place that we can work, play and live.”

Those passing the old John Johnson Elementary may have recently noticed cars in the parking lot, along with signage work.... read more