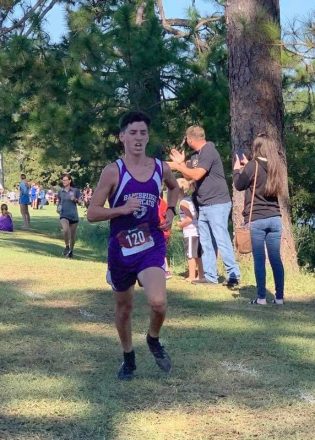 This past weekend, the Bainbridge Bearcat and Grace Christian Academy cross country teams headed to Tifton to participate in the Tift Invitational.

The Invitational started with the Middle School Boys 2-mile run.

Bainbridge’s Gambler Dollar followed up just over a minute later, placing 8th with a time of 12:21.00. This was Dollar’s best two-mile time yet.

The Middle School Girls two-mile run proved to be tough, with Bainbridge’s Teagan Barefoot being the only from the area to place in the top 40. She placed 32nd with a time of 16:23.00.

BHS had a great showing during the Varsity Boys 5K.

GCA had two runners place in the top 50.

With this race under their belt, the BMS team will now travel to Thomasville on Thursday for a meet against Thomas County Middle School, while the Bainbridge High School team will travel to the Westover Invitational on Saturday, October 2.

Bainbridge runner Harold Allen added another run under his belt this past weekend, claiming first in the Miami 100 Ultra... read more