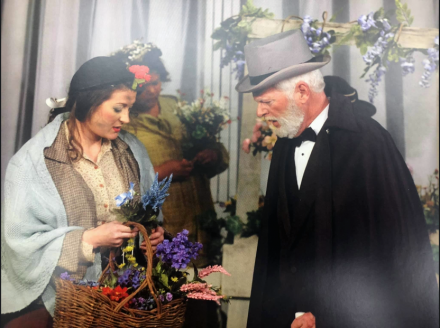 Roger playing the male lead in My Fair Lady at BLT in 2007.

Members and fans of the Bainbridge Little Theatre lost one of their most loyal star supporters this past week. Roger Porter passed away on June 5, 2020, following a courageous battle with cancer.

His full obituary is listed on page 8A of The Post Searchlight, and is registered with Cox Funeral Home.

His wife Bonnie recalls Roger first became interested in the arts and acting while still in high school. First he worked the lights, and then in his senior year, 1963, he starred in The Man Who Came to Dinner.  “At that point he was hooked and each place we lived he became involved in the arts, usually on stage.”

After moving to Bainbridge in 1979, he found the Bainbridge Little Theatre and auditioned for Cotton Patch Gospel. Following that up with Seven Brides for Seven Brothers.  “He never slowed down,” says Bonnie, adding, “too many plays to list; however, some of his favorites were Scrooge, Faith County, Oklahoma, My Fair Lady, Moon over Buffalo, to name a few.”

Veteran BLT associate Thad Nifong said any role ever given to Roger he did his best to treat every character with authenticity.  Mike Inlow recalls how much Roger loved the musicals. “He loved using his great bass singing range.”

Many other comments from friends are available on Facebook.

Chianti Bryant Chianti Bryant, 18, is being heralded as a hero after saving three occupants from a burning apartment. On... read more