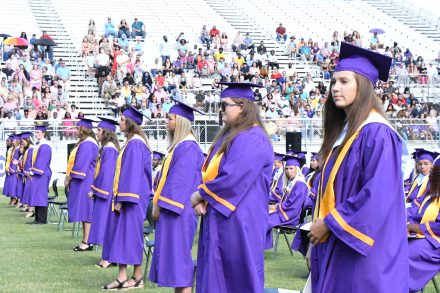 Honor graduates stand as their names are called during graduation.

Saturday morning the largest and most successful class in Bainbridge High School history graduated at Centennial Field while surrounded by friends, family and teachers who have supported them along the way.

The ceremony began with the processional led by Principal Roy Matthews, followed by Superintendent Tim Cochran and the other Board of Education members. Once all of the graduates were seated, Gracie Surratt held a moment of quiet reflection. Brenda Lucas led the Pledge of Allegiance, before turning it over to Hanna Lewis, who dedicated the graduation ceremony to late classmate, Dylan Olds.

“Always remember no matter where you go or what you do to never forget yesterday, but always remember today, because you never know what tomorrow can bring or take away,” Lewis told her classmates. “Although Dylan is not here with us, he will live in the hearts of the Class of 2020 forever.”

Austin Aldridge then welcomed guests and challenged his classmates to make the best of the time they’ve been given and remember all of the accomplishments they’ve made.

Aldridge reminisced on the multiple region championships, the state playoff appearances and the state championship that all occurred during their years of high school. In addition, the achievements made through band and the revamped drama program.

He concluded that the accomplishments don’t stop at graduation.

“Our story doesn’t stop here,” Aldridge said. “Today we leave our mark on Bainbridge High School… tomorrow we step out into the world to discover our passions and to pursue our future.”

Superintendent Cochran and School Board Chairman, Keith Lyle then presented two awards: The Mary Davis Pilot Club Award and the Earl Carr Gragg Award. The awards are chosen by the faculty and staff and are given to students who exemplify character, commitment and service.

The Mary Davis Pilot Club winner was Dianna Silva and the Earl Carr Gragg winner was Stokes Moore. Both students were given a round of applause for their outstanding achievement.

Silva gave the senior speech, where she spoke on the opportunities she and many others have been provided because of the hard work their parents or others had put in to make it possible.

“I try so hard in school because my parents work just as hard to provide my necessities,” Silva said. “I have seen and experienced their struggle, so I have decided to work hard in school in order to have the life my parents wished they could have had.”

Silva explained her parents were unable to attend college due to a lack of finances, but were forced to begin working, however they did this in order to provide a better life for Silva and her siblings.

“Classmates, I ask you not to overlook the hard work your parents or guardians put in to put a roof over your head, food on your table and shoes on your feet,” she said. So, put as much effort as they do into whatever you do next; put your all into it.”

Salutatorian, Sandy Baker followed Silva with an address to her classmates.

Baker began by thanking everyone who pushed her to become the person she is today. She told her classmates that it was impossible to pick one defining moment for her class, but it was the many little moments instead that made up who they are.

“The little things are what define our lives,” she said. “All the times we sat in the library or the lunchroom cracking jokes, painting signs for the first day of senior year or lining up for the senior parade those are the moments we will never realized we would miss.”

Baker recognized that high school did not end in the way everyone imagined, but life isn’t over. She said it is just beginning and high school will one day be one of the little moments in life’s big story that was written for each of them.

Valedictorian Hannah Sprenkle finished the ceremony by discussing the different paths everyone may find themselves on.

“Life is unpredictable and sometimes even messy,” Sprenkle said.

However, she assured her classmates that they need not worry, because God has a plan for all of them, even if they don’t know it yet.

“For I know the plans I have for you declares the Lord, plans to prosper you and not to harm you, plans to give you hope and a future.”

She told her classmates that everything happens for a reason, and she prays that each one of them finds themselves doing something they love.

Sprenkle’s classmates cheered her on, before singing the Alma Mater and being presented as graduates by Mathews and tossing their caps into the air.

Kids ages 5-13 hit the tennis courts on Wednesday for their final day of the Play Bainbridge Tennis Camp. Although... read more