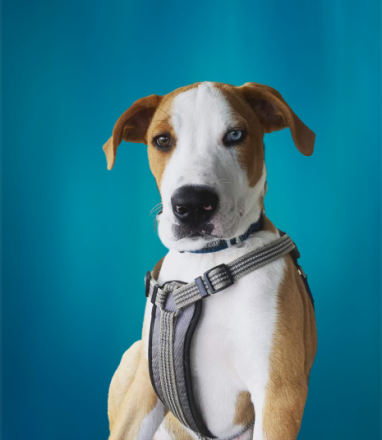 When first found four and a half months ago, Jiminy Cricket was sick and malnourished. Today he is happy and healthy.

Readers of The Post-Searchlight may remember the sad story and photo that appeared on the front page February 22 of a young pup who was dumped outside of the Bainbridge-Decatur County Humane Society during the night.  He was one of several of a litter left in a metal container. Four of the pups were still in the box. Three others were loose in the parking lot, one of them just lying there. All were emaciated and infected with mange; but there was one that appeared to be in the worst shape of all.

When shelter Director Ashley White arrived at work that morning, she thought at first this pup was dead. Then she heard a little whimper and realized he was struggling to breathe.

Shortly thereafter, as she was on the phone with a representative of the Leon County Humane Society in Tallahassee about another matter, she mentioned what had happened. They volunteered to come and get the pup that was in the worst condition. He was rescued by their society and began receiving extensive medical care. His recovery and story have been closely followed via Tallahassee television stations and postings from the Leon County Humane Society.

It was touch and go for a while, according to White, who received regular updates on his condition. “He had some close calls; but would always seem to pull through,” she said recently.

Now, four and one-half months later, the dog that was given the whimsical name of Jiminy Cricket, is healthy, happily playing and living the good life with his adoptive mother Shannon Colavecchio and family in Tallahassee.

But, that isn’t all. The big news is that he has also been declared the winner of the Leon County Humane Society’s Paws Calendar photo contest; where he raised over $7,000 of the more than $45,000 amount realized from the annual fundraiser.

Colavecchio, a board member of the Leon County Humane Society and a frequent foster parent says his winning is such a symbol of what humane societies do. The money raised helps provide medical and daily care for the animals like Jiminy  Cricket. “He wouldn’t be here today without that help,” she explains.

She picked him up to foster the day after he was rescued. His health concerns were such that he needed frequent worming, and nearly daily specialty baths to deal with his skin problems. “He was kind of like having a premature baby in the house,” she says. “During the first week he did nothing but eat, sleep and go to the bathroom.”

In the second week she began to see his personality come through.

She describes him as “a very playful, kinda goofy dog and pretty mellow for a six or seven month old pup. It is not his nature to be aggressive in any way.”

It was two or three months before he was medically cleared for adoption. By that time Colavecchio said she just couldn’t let him go somewhere else.

There are two other rescued dogs in the home, and last November Colavecchio adopted two young sons she had fostered. “Jiminy Cricket has completed our family,” she explains. “He has been the source of a special lesson in life for the boys.”