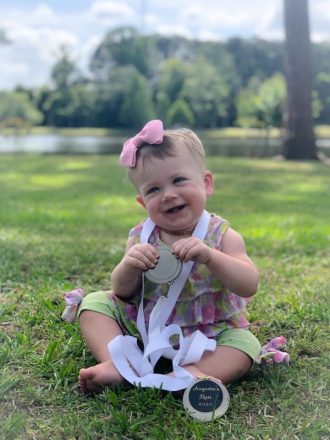 Augusta Harrell sits with the medals from the 5K run around her neck and thanks everyone who participated with a smile.

With tears in her eyes, a special mother of three recalled the events of her most recent child birth, getting emotional as she relieved the horror of not knowing if her baby would live or not. After delivering a premature infant in the passenger seat of her car while on the way to Memorial Hospital and Manor, there was a duration of time in which her own newborn was not showing signs of breath.

“Just make my baby breathe,” she repeated to the nurses while they performed CPR on what she described as a lifeless infant. While in this shocked state, the mother recalls that even though the situation was chaotic and scary, she felt peace from God and knew it was going to be OK. She remembers the moment she heard the infant’s first breath, followed by the feeling of relief flooding her body in knowing that her child was alive.

Bridget Harrell, a member of Bainbridge’s community since 2008, took her own uniquely traumatic childbirth experience, and selflessly turned it into a philanthropic, celebratory, and athletically engaging opportunity to give back to the people that helped her when she needed it most.

The weekend of May 23, baby Augusta’s first birthday weekend, Harrell hosted a virtual 5k to not only raise funds for Memorial Hospital and Manor, but to help provide business for local establishments during the economic deflation of COVID-19.

Harrell moved to Bainbridge in 2008 and began working at Ivey Funeral Home. After having her first child, she transitioned into being a stay at home mother, and discovered a second home at the local YMCA through exercise and weight loss. Eventually, Harrell was asked to join the YMCA board, and now serves as president.

Between her first and second pregnancy, Harrell spent a lot of time exercising at the YMCA, and it was a common joke that she was going to end up having the baby during one of the fitness classes. Turns out, years later, that Harrell did end up delivering her third child in front of the YMCA while on the way to the hospital.

The idea to hold some sort of race came to Harrell during the time that baby Augusta spent in the Neonatal Intensive Care Unit in Albany after her birth. While Augusta rested between feeding sessions, Harrell used that time to run on a treadmill she had set up in the hospital hotel room where she stayed while her daughter was being treated. She said that the idea of the 5k inspired her runs, which served as a form of therapy to her during that intense time.

When Augusta’s first birthday came around, Harrell said she was disappointed in herself for never making the race happen. Since Augusta’s birthday occurred during COVID-19, Harrell didn’t think that her race would even be possible to turn into action. She almost set the idea aside for a more convenient time, but something inside of her called her to stay loyal to the original plan.

Harrell reached out to The American and Southern Philosophy Brewing and asked if they would be interested in sponsoring a virtual 5k. After making arrangements with those businesses, she contacted Bainbridge engraving to have medals made, and reached out to her runners’ group to recruit participants. The only entry requirement was that whoever wanted to participate had to send a $20 check to Memorial Hospital and Manor.

On the Thursday, Friday and Saturday of Augusta’s birthday weekend, participants of Augusta’s Run were able to pick their own time to complete a 3.15 mile distance. After completing the 5k, the runners were instructed to pick up their medal at either The American or Southern Philosophy, and were encouraged to purchase themselves a reward meal at either of the restaurants. This neat and modern way of hosting a 5k not only benefited the recipient of the raised funds, but directly supported restaurants within the community during a time of decreased business.

“There were a lot of people that did the race that didn’t typically eat at those restaurants,” explained Harrell, “So it was nice that they got that extra business and exposure.”

Not only did this event raise funds for businesses, but it served as a symbolic celebration of Augusta’s life, something that Harrell gives credit to the wonderful staff at Memorial Hospital and Manor for saving. Harrell wants to raise awareness for the local hospital, and for the people that work so diligently there to not only provide medical attention for members of the community, but to protect the lives of those entering the world for the first time.

“This virtual event was an encouragement to our community,” said Lauren Harrell, Memorial Hospital and Manor’s Community Development Coordinator. “It was a wonderful way to celebrate the life of Baby Augusta as well as honor the care that our skilled staff and providers give.  We were thrilled to receive the funds raised by this event and hope to partner again in the future.”

“When I learned what was bought with the money, I was super happy,” said Bridget. “I just wanted to make sure that every other baby that ever came in there was taken care of.”

Harrell is glad to have had the opportunity to raise awareness on how great the hospital is, and what the people there did for her baby. She explained that if Memorial Hospital and Manor wasn’t there for her on that distressing night, her baby wouldn’t be alive today.

Plans made for ‘parklet’ on Broughton Street