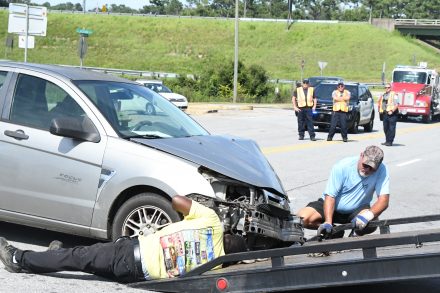 Jimmy’s Auto ties up the damaged vehicle in Friday’s wreck and loads it onto the trailer. The driver was transported to the hospital.

Friday morning Bainbridge Public Safety responded to a car accident on Shotwell Street that sent one driver to the hospital.

Public information officer Julie Harris said Dylan Glass was driving when he came up on an SUV that was stopped. The driver of the SUV was reportedly waiting for a oncoming truck to make a left turn, however Glass didn’t make the stop in time.

In order to avoid hitting the SUV, Glass swerved and hit the side of the pickup truck, slashing the truck all the way down and clipping the SUV as well.

Glass informed officers he was looking down and when he looked up the SUV had stopped, but it was too late to break.

Due to the fact he was looking down, officers believe Glass may have been on his phone.

Glass was then taken to the hospital for injuries after the airbags in his vehicle deployed, luckily no other injuries were reported.