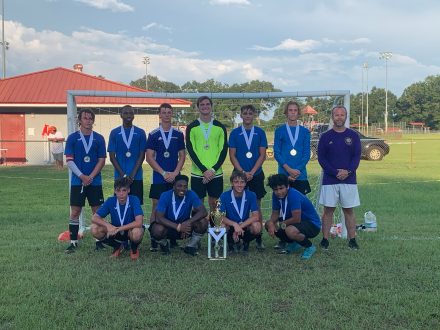 Inter Bainbridge Soccer Club traveled to Mayo, Florida this past weekend to compete in the Lafayette Super 6 Summer Classic Tournament.  For many of the players, it was the first time competing in such a tournament in months due the COVID-19 pandemic.  The team finished group play in first place.  They did not lose a match, finishing 3-0-1.  They earned a spot in the championship match versus FC United, the Mayo hometown club. Inter Bainbridge entered the match confident having lost no matches and having been the only team to defeat the hometown club during group play (3-1).  However, FC United managed to pull ahead 1-0 late in the first half and added another in the second half.  Inter Bainbridge added a goal and made a game of it, but ultimately fell short of completing their comeback as they experienced their first taste of defeat 2-1 in the championship match.  Nonetheless, Inter Bainbridge players were thrilled to have played so well in this tournament.

The team scored nine goals overall, with Mason Ard netting 6 of them. Brock Williams, Bob Gallagher, and Ashburn Roberts netted one goal each.  Dax Willis made huge stops all day playing goalkeeper for the team.  Ethan Daughtry anchored a stingy Inter defense with help from Otis Tabannah, Javier Salgado, Hunter Harris, and Josh Fillingame .  The team is composed of players from Decatur, Baker, Grady, and Thomas counties, and is coached by Jamie Ard.

Thursday afternoon the Lady Cats softball team took to the Bearcat diamond for their first home game, where they narrowly... read more