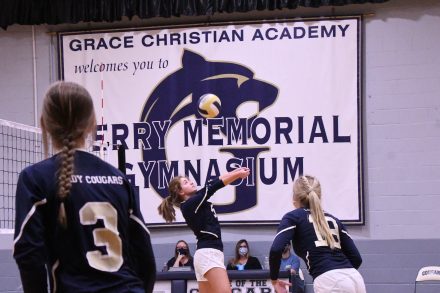 Hannah Friedman bumps the ball on Tuesday night in hopes of assisting get the ball over the net.

The Grace Christian Academy Cougars kicked off their volleyball season Tuesday night at home against Community Leadership, where they won 3-0. The Cougars then headed off to play region opponent, Georgia Christian on Thursday. The Cougars proved once again they were on top, winning 3-1.

Juniors, Lainey McRae and Ella Harrell both proved tough on the court. Harrell made 13 kills during the three sets, while McRae made 11. Sophomore, Mallory Jordan made seven kills and sophomore, Kat Griffin made five.

McRae and Griffin continued to dominate the game while serving. Griffin and McRae made eight serving aces each, while sophomore, Josie McConnell made three, junior, Mary Glenn Warr made two and sophomore Kassidy Widner and freshman, Lollie Gay each made one.

McRae also stood out in blocks, she made three solo blocks, while Jordan made one.

No one could have had success without assists.

Senior Emma Benedict had 12 assists throughout the night, while McConnell had 10 and sophomore, Hannah Friedman had five.

Coach Deanna Canfield said she was really happy with the way girls played. She knows it was their first home game and they had to get their jitters out, but they played extremely well.

Canfield said she was especially proud of McRae for stepping up and giving it her all.

McRae once again was on fire, making 14 kills throughout the sets. Harrell and Jordan each had nine, while Griffin had five, junior Isabella Barnett had three and Warr and Benedict had one.

McRae also had eight aces throughout the game, with Warr following up with six. Jordan hit two aces, with Benedict and Griffin also making one.

Benedict was a tremendous asset during the game with 35 assists, while McRae and Barnett each had one block.

“The girls showed a lot of heart and kept their composure when they were tested against a tough team on the road,” Canfield said. “I am very proud of them.”

The Cougars will head out on the road again this week and play region opponent, Highland Christian and North Florida Christian.

The Bainbridge Bearcats will take a road trip on Friday night to face off against the AAAAAA Valdosta Wildcats (1-0).... read more