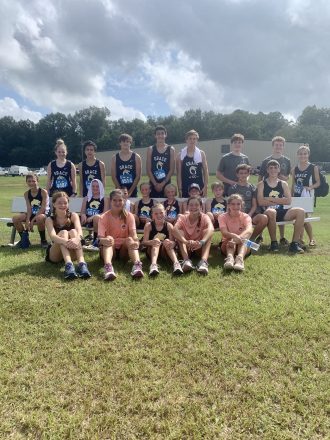 Cougar XC runners smile after a long day at the Lee County Invitational on Saturday morning.

According to race results, 143 runners participated.

For varsity, Daniel Jones was the first runner to come in for Grace. He clocked a time of 20:18.4 and placed 20th.

Pate Beckham clocked a time of 30:47.2, followed by Evan Sigman and Jay Lanier, who were mere seconds apart.

Middle school runner, Walker Elrod blew away the competition, placing third with a time of 12:32.5.

He was shortly followed up by Keith Eidson, who placed ninth with a time of 13:00.4

Kate Poitevint led the middle school girls, coming in sixth place with a time of 15:11.8. She was shortly followed up by Sybil Lee, who placed 27th with a time of 17:00.0.

The Grace Christian Academy Cougars kicked off their volleyball season Tuesday night at home against Community Leadership, where they won... read more