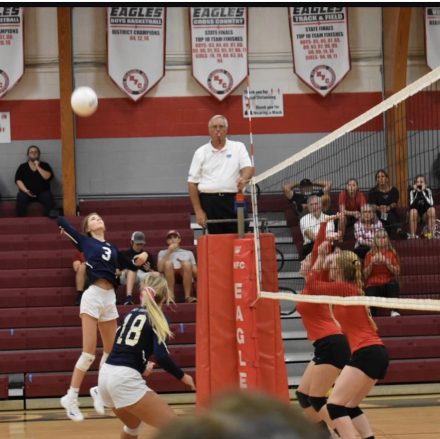 Mallorie Jordan attempts to knock the ball back over the net in the game against the NFC Eagles.

The Grace Christian Academy Cougars volleyball team traveled to play the North Florida Christian Eagles on Thursday, where the team went into five sets. Ultimately, the Cougars came out victorious 3-2.

“The girls came out hard and were in a rhythm,” Coach Deanna Canfield said. “We had a few hiccups along the way, but overall we stayed calm and did what we needed to do to win.”

Junior Lainey McRae was on fire at the net; she had 14 kills throughout the five sets, while sophomore Kat Griffin had seven, junior Ella Harrell had six, sophomore Mallorie Jordan had four, junior Mary Glenn Warr had three and junior, Isabella Barnett had two.

“Lainey put away some balls in the 5th set that we needed and we kept the momentum on our side,” Canfield said.

Sophomore Kassidy Widner stepped up in a major way during serving. She had four aces, along with eighth grader, Savannah McConnell.

“Kassidy had some huge aces in the 5th set,” Canfield said. “I was very proud of the composure she kept in a high stress situation.”

Jordan, McRae and Barnett all hit three aces, while Warr hit two during the five sets.

Jordan, McRae and Harrell additionally helped when it came to blocks.

“Kat and Mal both did a great job on the outside,” Canfield said.

The game couldn’t have been won without the assistance of Warr, who had 22 assists throughout the game.

“I’m very happy with how the team played together as a unit and we had some people step up at major points,” Canfield ended.

The Cougars will play again Friday at home against Highland Christian Academy at 5 p.m.

The Lady Cats softball team was on fire Thursday in their game against Thomas County Central. With the pitching prowess... read more