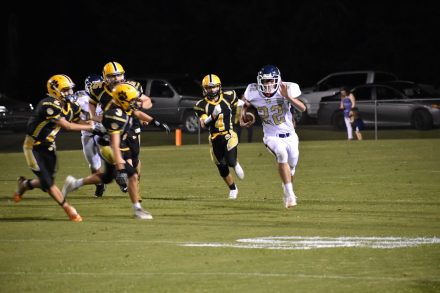 Joshua Enfinger takes the ball during the third play to make history for the Cougars and score the first touchdown in the school’s football program.

Cougars take the field for first time against Crisp Academy

The Grace Christian Academy Cougars had their first ever football game on Friday night against Crisp Academy. While the Cougars fell short 33-56, it was an exciting night in the school’s history.

“The Board, faculty and students are thrilled to have football at GCA,” Head of School, Cile Warr said. “It has been a longtime dream and it was so exciting to be a part of history last night and see all the fans supporting our boys and cheerleaders.”

Head Coach, Lance Godwin said going into play Crisp Academy, he knew it would be a challenge, but the Cougars were up for it.

The Cougars started strong with #22 Joshua Enfinger getting a rushing touchdown in the third play of the game. He ran for 62 yards, scoring early on.

The team eventually fell behind in the first half, but quarterback Hayden Cohen helped in the second half lead the offense.

“Our seniors rallied the team spirits and came out firing in the 2nd half,” Godwin said.

“We put together several good drives and were able to score five touchdowns,” Godwin said. “Our guys never gave up.”

While the team did come up short, Godwin said he was extremely proud of the effort the team showed Friday night.

They will now play Vidalia Heritage on Friday.

Godwin said the team is really focusing on defense during practice on Monday. He saw the offense click and execute their plays during the game against Crisp Academy, but wants to work on several defensive strategies.

“We are going to work hard this week and be ready to travel to play Vidalia Heritage on Friday,” Godwin finished.

The Bearcats have been hard at work since their loss against Valdosta on Friday night. Now, they are ready for... read more