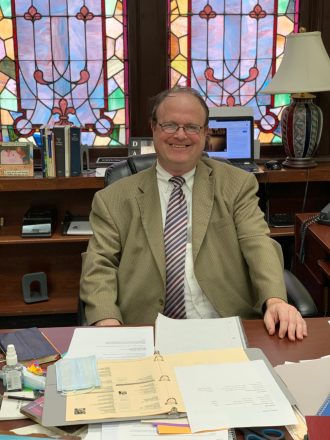 Bainbridge First Presbyterian Church has called a new pastor. Rev. John Erthein began his ministerial duties locally on October 4, when he preached his first sermon. He comes to Bainbridge from Village Presbyterian Church in Tampa, Florida, and has served churches in DeFuniak Springs, Fla. and Pennsylvania.

Erthein grew up in New York City and Long Island, N.Y. where he was baptized and confirmed in the Episcopal Church. As a young adult he felt he was being drawn to the Presbyterian Church because of its richness of Reformed Theology and evangelical renewal.

He is a graduate of Cornell University, then from the University of Michigan Law School. After practicing law a few years in the Detroit area, he says the most significant turning point of his life was when he attended a Billy Graham Crusade, was convicted of his sin, repented and confessed Jesus Christ as his Lord and Savior.

“That was the experience that planted the seed that would grow into a desire to pursue ordination as a minister.” he explains. He received his Master of Divinity from Princeton Theological Seminary in 2002.
He says he believes the Bainbridge church is a great match for him, that he was especially glad to receive a call to come here. An additional benefit is that it is closer to his three children, Matthew 14, daughter Lillian 12 and daughter Laura 9, who live in DeFuniak Springs. “It is much closer than Tampa.”

Pastor Erthein loves traveling. He lived for one year in Germany as an exchange student while in college, and has visited members of his mother’s family who live in England on several occasions. One trip that has been very special to him was a trip he took with a pastor group to Israel.

Erthein is looking forward to participating and supporting the existing programs of the church, as well as working with other pastors in the community. He wants to become involved with a service club when regular meetings are able to resume.

A welcome new feature he has added to the Presbyterian programing is a morning devotional presented on Facebook each morning, Monday thru Thursday. Scripture readings are given, then a short meditation on how the scripture speaks to him that day,

“The more I read the Bible and preach on the Bible, the more realistic I find it.” He makes special comments on the miracles of Jesus, while adding the biggest miracle of all is the resurrection of Jesus and the forgiveness of sins.

His hobbies include watching movies. He refers to himself as a movie buff. He has always loved movies, especially the classic ones. He also enjoys several genres of music.

Thanks to a special gift, he now has a friend come to live with him and keep him company in Bainbridge. It is a little yellow kitten he has dubbed “Dingbat,” in honor of the old Archie Bunker series and the moniker he hung on his wife Edith Bunker.

Rec. Authority preps for drive by trunk or treat later this month

The Bainbridge-Decatur County Recreation Authority is excited to announce they will be hosting their annual Trunk-or-Treat this year with a... read more