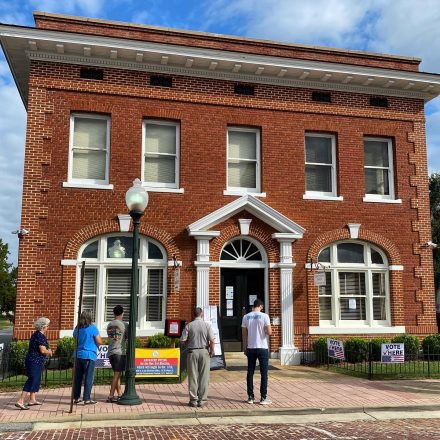 Voters waited outside the Courthouse Annex on Monday to secure their vote on the first day of Early Voting for the 2020 Presidential Election.

This number of voters is more than the number that turned out on the last day of voting for the Presidential election in 2016, Chief Elections Official Carol Heard said.

“I haven’t seen lines like this in a while,” Heard said. “I don’t know what’s happening.”

Heard is referring to the early voting lines that can be seen wrapped around the Courthouse Annex throughout the day. However, she reminds people the Fairgrounds are open to early voting as well.

“The Fairgrounds are only seeing about half the crowd we see at the Annex,” she said. “But, they have a larger location and more machines out there, so voters are certainly encouraged to go out there.”

For individuals who are 75 years of age or older, Heard reminds them they don’t have to wait in line to cast their ballot.

There is a law that allow individuals of that age, along with those who are disabled to go to the front of the line between the hours of 9 a.m.- 4 p.m.

“Nothing is more passionate than a Presidential Election,” she said. “We knew it would be about 70% voter turnout.”

Even with such a high percentage, Heard would love to see 70 percent, plus more.

Heard said they hope to begin scanning in mail-in ballots as early as Monday, so the ballots can be tabulated for Election Night in order to accurately predict a winning candidate.

Heard said it’s hard to tell if the Presidential Election or highly contest Sheriff’s Election is driving the voting this year, regardless she is thankful to see voters exercising their rights and encourages everyone to contact the office of Elections if they have any questions about Early Voting.