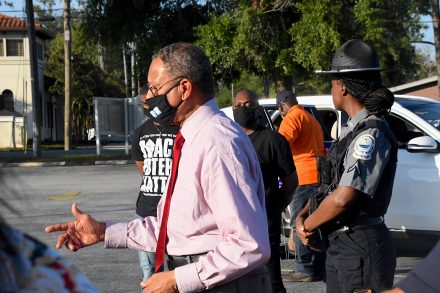 Ahead of the election, Congressman Sanford Bishop made a stop in Bainbridge to campaign on Sunday. As a part of his “Bishop on the Move” campaign tour, Bishop stopped in Cairo earlier Sunday, before arriving in Bainbridge later in the afternoon. Meeting in the Bainbridge Mall parking lot and after an opening prayer, Bishop addressed the small crowd of supporters, campaign staff and police office escorts.

“Politics is determining who gets what, when, where and how,” Bishop said, touting his work on appropriation committees, including food distributed during the pandemic. One issue he was rather vocal on was rural broadband development, and how he had helped put $1 billion into developing it. “I believe I have been put where I am by God for such a time as this… to help all of Southwest Georgia to connect and recognize their full potential.”

He also gave his views on gun control, citing his disagreement with the NRA. “I’ve been a lifelong NRA member,” he said. “Had an A-plus with them… but I had to part ways with them when they didn’t support a background check that would have stopped Dylan Roof from going into that church in Charleston.”

“The one tool that we have is the vote,” Bishop said as the speech wound down.

After the speech had concluded, Bishop, his staff and most attendees proceeded to make a drive through Bainbridge neighborhoods in a caravan, heading down Martin Luther King Jr Drive and crossing the river on Dothan Rd.

As of the writing of this article, Bishop remains the incumbent for Georgia’s second Congressional district; an update on the office holder will come post-election.

The Rotary Club met this past Tuesday, with the speaker for this week’s meeting being Rotary District Governor Kirk Driskell.... read more