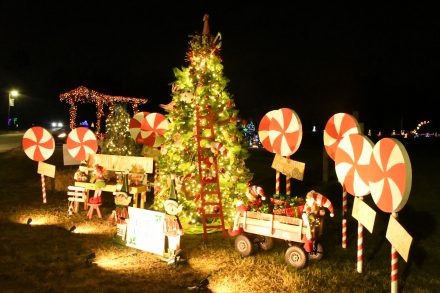 The Tinsel Trail and Lights on the River lit up on Monday night for viewers to walk through and enjoy.

Christmas is in the air at the Earle May Boat Basin. Both the Tinsel Trail and lights along the river have now been lit up for guests to enjoy viewing.

“They are meant to mimic a meteor shower coming through the trees,” Crystal Hines of the City said.
Hines said the City also added spotlights to better highlight some of the displays and 60 feet of drive-through light arches.

Just when residents thought the Boat Basin couldn’t get any brighter, the Bainbridge- Decatur County Chamber Of Commerce began their inaugural Tinsel Trail, featuring 114 live trees decorated with bright ornaments and adorned with bows and other handmade accessories.

“I’m extremely pleased with the creativity businesses have put into their trees,” Chamber President Lauren Minor said. “They have really taken this opportunity to advertise their business in big ways.”

“The amount of volunteers has been tremendous,” Minor said. “Without them, this wouldn’t be a success.”

Following Sunday night’s storm, Minor said a large group of volunteers headed out to the trail to make sure all the trees stood upright and rehung ornaments and cleared debris from the trail.

“I’m so thankful for the volunteers, sponsors, staff and board of the Chamber of Commerce and the City for making this possible,” Cannon said.

Cannon has also been impressed with the sense of creativity and believes the trail and decorating of the trees have been a great way to foster a sense of community and a great way to give back to the community, who has supported businesses throughout the year.

Minor said the Chamber of Commerce has received nothing but positive feedback on the Tinsel Trail.
“It’s a great thing to do with your family this holiday season,” she said. “We’ve seen a lot of foot traffic already, and it only has the potential to grow.”

The Tinsel Trail will host two events for viewers to enjoy.

They are additionally asking guests to go on the Southwest Georgia Tinsel Trail Facebook page and post their favorite tree for the “People’s Choice Award,” which will be announced at the conclusion of the Tinsel Trail on January 5, 2021.

Cannon said they want the Tinsel Trail to become an annual event and are already looking at sponsors and nonprofits from all over the Southwest Georgia area to participate for next year. She encourages anyone interested to contact the Chamber of Commerce and go ahead and get signed up.

Both the trail and the lights on the river will turn on every night through December just as it begins to get dark. The City and Chamber of Commerce hopes everyone enjoys these festivities and encourages families to look for upcoming holiday activities as they approach.

Salvation Army provides meals to those in need on Thanksgiving

BY ETHAN REDDISH The Salvation Army has been rather busy helping the community this holiday season, with two back-to-back days... read more