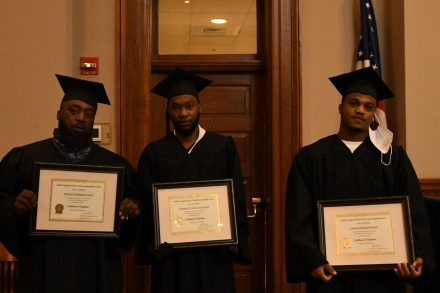 Left to right, Devius Lyles, Sherrick Footman and Deon Johnson hold up their certificates after graduating from the Accountability Court.

Wednesday morning the South Georgia Judicial Circuit Accountability Court graduated their second set of participants, Deon Johnson, Sherrick Footman and Devius Lyles, honoring their hard work as they continue on their journey of wellness and sobriety.

Senior Judge, J. Richard Porter welcomed the graduates into the Courtroom and recognized them before turning it over to guest speaker and graduate of the Grady County Accountability Court, Chris Maples.

Maples told the graduates he began drinking at an early age and eventually became strung out on drugs at age 17.

However, Maples said his life changed forever in July 2016 when he was busted for manufacturing methamphetamine.

“I went to court in September and I thought I was going to prison, but Judge Cato offered me time and drug court,” Maples said. “I took the offer out of desperation.”

While in drug court, Maples said Judge Chason approached him and asked how he could help turn Maples’ life around. Maples said he was honest with Chason and told him he didn’t need time in between drug tests. From that day forward, Maples was drug tested five days a week.

“I still had a want, but then I was invited to church by my girlfriend,” Maples said.

Maples admitted he did not believe in God at the time, but as he began to attend church more he became desperate to know God and was saved in 2017.

“I had a dream I had just done dope and I woke up and my body was pouring sweat,” Maples said. “It’s called a user’s dream, then I got on my knees and asked God to take away the want for dope, and since that day I have not had a want for dope.”

Maples has been tested since that dream. He said he has been in the same room as dope several times, but has not had an interest in getting high, because of God’s intervention.

“It’s amazing the things you think won’t help you that do help you,” Maples told the graduates. “Don’t give up; just because you’re struggling doesn’t mean you’re failing.”

Maples advised the graduates that when they give up is when they fail and run back to the drugs that broke them.

Maples said since his graduation his fellow classmates have reached out to him, wanting what he has to help them stay clean. Maples said he ushers them to the front row of the church, because all he has is Jesus and the drug court who helped him get there.

“When I got baptized my probation officer and my teachers were there,” Maples said.

Maples finished by telling the graduates they were all miracles and to keep moving forward.

Followed by a round of applause, Porter told the graduates they have the ability to be successful in life, just like Maples. He then called Footman, Lyles and Johnson to receive their certificate of completion from the program.

The graduates were then asked if there was anything they would like to say to fellow classmates.
“I just want to encourage everyone to do the right thing,” Johnson said.

Footman reminded his classmates that the program is what they make of it, before Lyles wished them good luck.

“God bless y’all, thank you for everything,” he said.

Porter wished the graduates well before sending them off to celebrate with their families and a cupcake treat.

Sam Dunn has some stories to tell about “the good ole days,” and he has spelled it all out in... read more