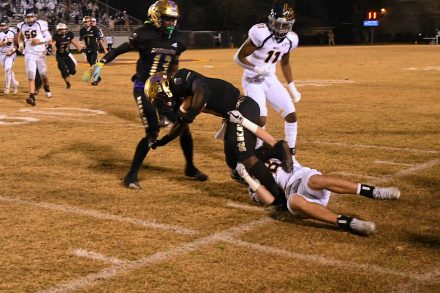 The Marist War Eagles are now 12-0 after the Bainbridge Bearcats left them unanswered with a 42-0 win on a cold Friday night at Centennial Field.

The loss eliminates Bainbridge from moving onto the AAAA State Championship, which will be held December 29 in Atlanta.

Marist opened up scoring in the first quarter when quarterback Champ Davis made a 2-yard run, earning the first touchdown of the night. Dawson Jones made the kick and it was good, giving the War Eagles a 7-0 lead with 4:36 left in the first.

With only eight seconds remaining in the quarter, War Eagles running back Lincoln Parker made a 4-yard run, scoring the second touchdown of the night. Jones made the kick and it was good, leaving the Bearcats trailing 14-0.

Heading into the second quarter the Bearcat defense only allowed one touchdown.

War Eagles running back Andrew Mannelly made an 11-yard run with 7:19 left on the clock. Jones made the kick and it was good, giving the War Eagles a 21-0 lead going into halftime.

Coming out of halftime, the War Eagles could not be stopped and scored three additional touchdowns in the third and fourth quarters.

While it wasn’t the result the Bearcats were hoping for, Head Coach Jeff Littleton was proud of the hard work his team had put in this year and the seniors for their leadership they had displayed this season.

“I’m proud of the team,” Littleton said. “I haven’t been disappointed in this group all year; they’ve practiced hard and they’ve had energy and I’m proud of the fact we work hard and don’t make excuses. We got beat tonight, but we don’t have anything to be ashamed of.”

Littleton said this loss means they just have things to work on and improve on for next year.

The Bearcats end the season with 10-3 overall record and a 5-0 sub-region record, leaving them much to be proud of.

The Bainbridge Bearcats successfully beat the Cedartown Bullodgs on Friday night in a 21-10 game, allowing for the Bearcats to... read more