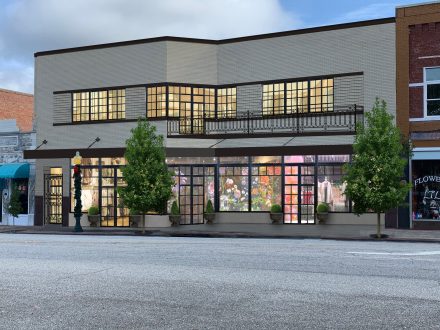 A rendering of what the proposed building will look like.

Lauren and Mark Harrell both work full-time, but their love for downtown Bainbridge and its recent growth inspired them to tackle a new project. The Harrells recently purchased the building formerly known as Alderman’s, where they intend to house three retail fronts and live in the separate lofted area above.

“We both love Bainbridge and are so appreciative of those who have invested in our downtown and it has been so fun watching it come alive,” Lauren said. “We desired to be a part of that growth and can’t wait to make downtown our home.”

According to husband, Mark, the building has a long way to go before it can be called home.

The couple has yet to lease out any of the space below, but has discussed the possibility with some interested prospects.

“There will be three condos below that we would like to rent or sell,” Mark said. “There will be an HOA on all the buildings, but it could potentially be just one buyer if someone needed all the space. We won’t put in any walls until we know what the buyer wants.”

Buyers can feel at ease knowing they won’t have to deal with any electrical or HVAC renovations, as Mark and Lauren are already working to remedy the current status of the units in the building.

Ray Finger is leading the plans, which are intended to be finished by the end of February. Mark said they will then bid the project out, while he and his wife finish cleaning the building.

The plan currently offers three separate entrances to storefronts: a left door entrance, a center entrance and a right door entrance with a hidden exterior door in the back that allows the Harrells to come and go at their leisure.

While Lauren and Mark would be happy to rent or sell the space to anyone, Lauren would love to see her idea of a local Downtown Market or book store come to fruition.

“I have a vision of a local book store “Broad Street Books,” she said. “I see it as a great community spot with literary events and gatherings.”

Mark would prefer another men’s clothing retailer, but will settle for any store as long as it brings more people to the community.

When it comes to the living portion, Mark said Lauren also has a vision, as does he.

The couple intends to put three bedrooms on the right side with a center hallway and storage on the left. The main dining area, kitchen and living space will be situated in front of the large windows at the front of the building.

While conceptualizing the idea, Mark took paneling off the wall and uncovered beautiful exposed brick, which the couple intends to keep.

The couple is also looking to keep the bead board flooring they uncovered. They will have to replace the current flooring, due to leaks from the roof, but believe they have enough on the bottom floor to repair and restore everything in the living area.

Mark said they are both new to the renovation projects.

“I’ve done some house renovations, but nothing like this,” he said. “It’s a little scary, I know the price on the front end, but if it comes in worse than the worst case scenario I’m a little worried about that, but we’ve applied for some loans through the help of the DDA.”

With all the renovations that will need to be made, Mark expects to be in the house by next March, while Lauren is hoping for next December, so their daughter Ella will have the opportunity to live there before she graduates.

When asked if the project was successful would they consider another renovation project, they both agreed, saying “We are always open to new projects that will help continue the trend of putting Bainbridge on the map.”