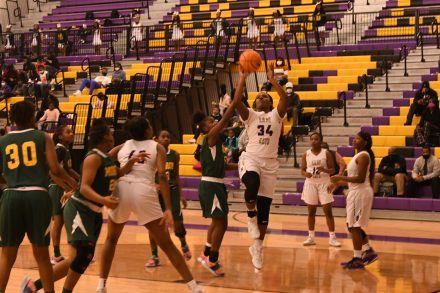 Above, Taralyn Brown tries to shoot her shot, while a Lady Tornado tries to grab the ball.

Monday, February 1, the Lady Cats and Bearcats basketball teams took on region rival, Monroe where both teams fell just short of a win.

The Lady Cats played a tight game throughout most of the first quarter with the Lady Tornadoes barely leading 7-6.

Angel Peterson led the first quarter, scoring four points. She made a three-point shot along with a free throw. Detavia Salter also netted two points with a layup.

Headed into the second quarter, the Lady Tornadoes put up a strong defense, allowing the Lady Cats to only score five points.

Peterson made another three-point shot, while Taralyn Brown scored two points with a layup.

However, the Lady Tornadoes scored 11 points, leading 18-11 headed into the half.

Coming out of the half, the Lady Cats attempted to make up for lost points by scoring eight points in the third quarter, while the Lady Tornadoes scored another 12 points.

Salter led in the third quarter, scoring four points through two layups, while Anndrea Porter and Kirston Noble both made a layup of their own.

The Lady Cats gave it their all in the fourth quarter, eventually coming up short 32-39.

The defense held the Lady Tornadoes to only nine points, while they netted 13 points.

Salter was on fire, scoring 8 of the 13 points, followed up by Porter scoring three points and Courtney Sanders scoring two points through two free throws.

Head Coach Kelvin Cochran was hoping for a win, but knows the team struggled on Monday night.
“We struggled in the first half and offensively all night,” he said. “Kirston Noble picked up two quick fouls in the first minute or two of the game and had to go to the bench and we’re playing our third straight game without our starting point guard, Angel Peterson, who’s still in the concussion protocol from a collision with a Monroe player from our previous matchup.”

Cochran said that really hurt them during Monday night’s game.

“We just couldn’t make many outside shots verses their zone defense,” he said. “We had plenty of good looks at the basket though.”

Despite this, Cochran knows the girls played hard, but said they just need to be more productive on the offensive end.

Following the Lady Cats loss, the Bearcats stepped up to the court and faced a narrow loss of their own 52-56.

Mark Taylor was on fire in the second quarter, scoring three three-pointers. Borden helped out Taylor, making one layup and giving the Bearcats another dominating 11 points.

It all came down to the fourth quarter, where Taylor scored eight points through a three-point shot, two layups and a free throw. Levens made three layups, scoring six points and AJ Grant netted five points with a three-pointer and two free throw shots, totaling 19 points in the final quarter.

The Lady Cats and Bearcats will now take on Cairo on Friday night at home.