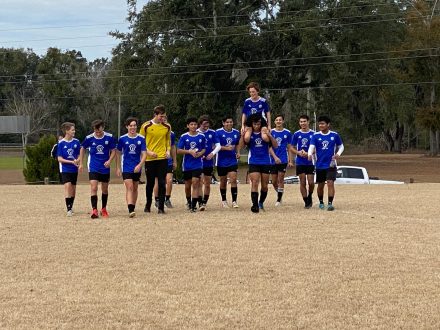 Inter Bainbridge Soccer Team could be found celebrating on Saturday afternoon after their win against Cairo.

Opening the scoring in the 7th minute was Mason Ard. He cut inside to take a knuckling, crossing shot that the opposing keeper was helpless to stop. The score remained 1-0 until the 29th minute with Inter Bainbridge having several opportunities while holding Cairo to limited chances before Juan Gorena widened the gap to 2-0 with a solid shot on target. The teams went into halftime with Inter Bainbridge holding a commanding 2-0 lead. Within the first minute of the second half, Cairo earned a penalty kick following a handball call going against a Bainbridge defender inside the penalty area. Cairo failed to convert the attempt, and Bainbridge immediately went the other way on attack, earning a penalty kick of their own following a foul on Brock Williams inside the penalty area. Jose Avalo stepped forward to take the penalty, which he calmly converted, to give Inter Bainbridge a 3-0 advantage. In the 43rd minute, Sam Surratt scored when a crossed ball found its way to him waiting wide open on the far post for a tap in goal. Gorena scored his second goal of the day in the 44th minute, and Avalo scored again in the 49th minute to widen the gap to 6-0. Avalo finished off his hat-trick in the 59th minute after taking an assist from Ethan Daughtry. Ard finished the scoring in the 74th minute after taking an assist from Javier Salgado.

According to Coach Jamie Ard, “Dax Willis was solid in the goal. He made necessary stops when he was called upon to do so, which stifled and frustrated the Cairo attacking players. Ethan Daughtry, Juan Gorena, Angel Guzman, Kasin Taylor, Riggs Rentz, and Javier Salgado limited Cairo’s attack. Mason Ard played a bit deeper in the midfield than usual, and he and Javier really controlled the game by maintaining possession and winning possession back quickly when it was turned over. Juan Becerra and Will Porter provided width so that space was created for the more central players to attack and score. Sam Surratt looked like he really matured as a player during this match, and it was good that he was rewarded with his first goal. Brock Williams played in a more advanced attacking role, and he was responsible for the penalty that we earned to break the match open when he was fouled in the box. Even though he did not score, his play was crucial. It was also encouraging to see so many different players being responsible for scoring goals in various ways.”

“The first half remained close primarily because we failed to take advantage of a couple of promising opportunities, and we failed to clear the ball away from our goal on occasion. However, I always felt like we were in control and would break through sooner or later. The only time I thought we may be in for a match was when Cairo earned a penalty right at the beginning of the second half. Had they cut the lead to 2-1, then I think we would have had a fight on our hands. When they missed that opportunity, I think all the wind went out of their sails, and we went and earned a penalty of our own that we converted. Once we converted that penalty, there was never any doubt about the outcome.”

Inter Bainbridge’s Assistant Coach Corey Morrison commented, “The guys were really sharp for the most part of this match. We have to continue to watch our shape and be sure that we get the ball cleared off our own end in dangerous situations more effectively, but those were the most glaring issues that I saw. Fortunately, that didn’t cost us today.

The BHS Bearcats went up against Westover on Friday, January 29, after having lost to them earlier this season. The... read more