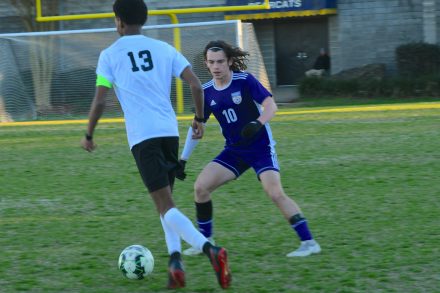 Mason Ard goes up against a Valdosta Wildcat in hopes of getting the ball back and taking it to the net.

The Wildcats scored first, in the 28th minute, as an Valdosta attacking player was fouled just outside the Bearcat penalty area. On the following Free Kick, Wildcat Midfielder Hayden Coggins, sent a Lofted curling kick from 23 yards out to the right side just past Bearcat Keeper Parker Lowe’s reach and into the Bainbridge Goal to give Valdosta a 1-0 halftime lead.

In the 42nd minute of the second half, Bearcat Senior Forward Jose Avalo scored a goal to tie the game at 1 a piece. On the play Junior Midfielder Mason Ard was credited with an assist, as he intercepted a pass then found an opening sending a through pass to Avalo who scored on a shot from the top corner of the 6 yard box.

Bainbridge took the lead, in the 54th minute, as Senior Aiden Matthews got by the Valdosta defense and scored giving the Bearcats a 2-1 advantage.

Bearcat Junior midfielder Juan Becerra was credited with the assist on the play, as he crossed a pass into the penalty area that deflected off a Wildcat defender and into the air to Matthews.

Matthews, using the outside of his foot, quickly tapped the ball up and over an onrushing Valdosta goalkeeper’s head from six yards out for the score.

Despite several attacks by both teams, Valdosta was able to deliver a fortunate goal to tie the score at 2 with only 10 minutes left in the contest.

With the clock winding down Valdosta sent in a corner kick from the right side and WIldcat defender Parker Jackson was able to head in the pass to the left corner of the goal from center of the six yard box.

Despite the tie, Coach Lewis was proud of the team’s effort and felt Bainbridge did a good job battling the class 6A Wildcats.

Bainbridge will next take on Early County in Blakely on Feb. 18.

Lady Cougars get win on Homecoming

The GCA Lady Cougars were pitted against the Byne Christian School Saints for their Homecoming game last Friday. The girls... read more