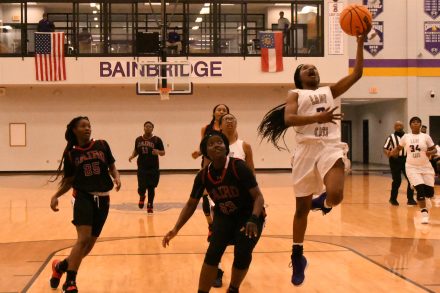 Angel Peterson (3) jumps up to make a layup while the Syrupmaids look on, hoping to get the rebound.

Headed into the match, the Syrupmaids were undefeated and ranked number one for the play-in region tournament, while the Lady Cats were ranked number four.

The Lady Cats started off slow, scoring only four points in the first quarter. Kirston Noble made a three-point shot, while Angel Peterson made a free throw, giving her one point. However, the Syrupmaids scored nine points during the first quarter, giving them a five-point lead.

The defense held the Syrupmaids in the second quarter, allowing them to score only three points, while the Lady Cats netted a total of 13 points.

Anndrea Porter led the second quarter with seven points. She made two layups and a three-point shot. Taniah Register followed up Porter with six points of her own, making a pair of layups and two free-throw shots.

Headed into halftime, the Lady Cats led 17-12 and refused to let up.

Coming out of the half, the Lady Cats scored 19 more points, while the Syrupmaids scored 13, hoping to regain their lead.

Noble was on fire, going 3-for-3 in her three-point shots.

Detavia Salter and Peterson both scored four points through a series of layups, while Taralyn Brown and Porter both answered with one point of their own during a free-throw.

It all came down to the final quarter, when the Lady Cats eventually pulled through with a 46-35 win.
Porter and Salter both scored four points, while Brown made a layup, giving them 10 points in the final quarter and allowing for the Suyrupmaids to score 10 points as well.

Head Coach Kelvin Cochran was delighted with the team win.

“They made me very proud Friday night,” he said. “I thought the girls played great defensively versus a very good Cairo team.”

Cochran said he believes the Syrupmaids are ranked number three in the state.

“We were fortunate to get our point guard, Angel Peterson back for the game,” Cochran said. “She was a big lift for us, she’s kind of the spark plug to our team for what she brings in her style of play. Overall though, it was a great team win as we got contributions from several girls and it’s always good to have that.”

Due to quarantine, the region basketball tournament has been canceled. However, playoff seedings will be based on the 10 regular season region games played. The Lady Cats are seeded number four and are hoping to play a game in preparation for playoffs.