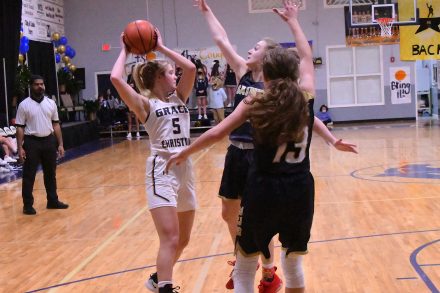 Ella Harrell looks for a teammate on the court to get the ball away from the Lady Saints.

Lady Cougars get win on Homecoming

The GCA Lady Cougars were pitted against the Byne Christian School Saints for their Homecoming game last Friday. The girls came out the victors, with a final score of 46-34.

The team netted the most points in the first quarter, with a score of 16 points. Ella Harrell made a lay-up; Lainey McRae scored five lay-ups; Mary Glenn Warr made two free throws; and Kassidy Widner shot a pair of free throws as well.

The girls scored slightly less in the second quarter, with McRae scoring a pair of lay-ups, and both Warr and Widner scoring a three-pointer a piece, for a quarter total of 10 points.

After half-time, the team scored their lowest of the game, only 7 points. Harrell shot a three-pointer, while McRae made a pair of lay-ups. The girls made a comeback in the fourth though, with Harrell making a free throw; McRae shooting a pair of lay-ups; Warr scoring a three-pointer; Isabella Barnett making three free throws; and Widner scoring a lay-up, for a quarter score of 13 points, and securing the girl’s win.

“Last night we played a very good Byne team. They came out pressing us up and down the court,” Coach Lance Godwin told the Post-Searchlight. “We handled pressure much better tonight. Our girls played aggressive defense and hustled after loose balls. We rebounded the ball better tonight than we have been doing.” This game was also the Lady Cougars last home game this season. “We came out in the 2nd half and played much better man to man defense. This defense helped us cause turnovers that resulted in lay ups. It was good for us to get a win in our last home game of the season.”

Friday night the Lady Cats took on region rival Cairo in an epic showdown. Headed into the match, the Syrupmaids... read more