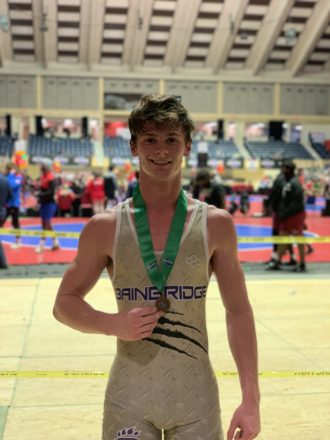 Hunter Harris smiles after placing in fifth place at the state finals and being named a region champ.

On Wednesday, January 10, the BHS Wrestling Cats went off to Macon to compete in the State Wrestling Finals. A total of 65 teams from around the state were competing, with the Bearcats bringing 11 boys and one girl to the match, a record for them. Only one of their wrestlers failed to qualify for finals. “With no starting seniors on the team, we are extremely young. We are led by four juniors who are tough to beat,” Coach Chad Smith said.

Nine of the eleven boys advanced to the second round. McKenzie Harris, the lone girl who made it went two and out in the first round. “She wasn’t able to practice due to sickness the last 3 weeks of season,” Smith said. “Daniel Riche, Kendrick Henry and Thomas Neal looked solid in round one in their matches.” In the second round, Hunter Harris, Lawson Singleton, Shedrick Kyles and Sesan Edwards were able to make it to the third round to compete for the quarterfinals. All of the Cats were pushed into the consolation bracket during the third round, with only Harris and Kyles making it to the fourth round. Smith praised their performances in the round: “In round four, Hunter Harris and Shedrick Kyles pulled out huge victories over state champions Jefferson High and top five Perry High School.” They entered the quarter finals in the consolation bracket; Shedrick, competing in the 195 weight class, lost to an opponent from Cairo, while Harris won, coming in fifth place for the finals.

Coach Smith expressed optimism for the team’s future. “The future is bright for this team and I can’t wait to get started next year. I was very impressed by several of these guys,” he told the Post-Searchlight. He continued to praise the team: “Our heavyweight has only a month of wrestling and won region. Hunter Harris is a natural leader and a region champ, Thomas Neal continues to get better each year, Josh Fillingame is a 10th grader and region champ, and Daniel Riche continues to grow along with region champ Lawson Singleton. Returning state qualifier from last year, Malcolm Spann had a tough day and was out of weight class while competing this year. First year varsity wrestler Kagen Castro filled the 138 spot and came along way from the start of the season. 10th grader Alex Pearson dropped from 160 to 145 to fill a varsity spot for us to compete at state. All these guys have done well for us and made this year a very big success!”

The Bearcat Baseball team returned to the Bearcat Diamonds last week to hold practice and prepare for another winning season.... read more