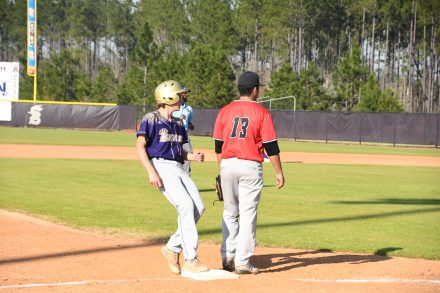 A JV Bearcat waits on third base, hoping to run home and score run during the game against Cairo.

The JV Bainbridge Bearcats faced off against Cairo in a doubleheader last Monday, where they fell short in generating runs.

The Bearcats lost to Cairo 7-1 in the first game of the afternoon, giving up seven runs in the second inning.

The Bearcats only run came in the bottom of the second inning.

Bolton Yarbrough walked up to the plate and doubled on a line drive.

While Yarbrough waited on second base, Koby Wynn was hit by a pitch, however courtesy runner Keenan Phillips took his spot.

During a wild pitch to batter, Drew Clayton, Yarbrough advanced to third and Phillips advanced to second.
Clayton was then walked as well.

Finally, Logan Rich stepped up to the batter’s box and was hit by a pitch, allowing for Yarbrough to score.

Kaegan Castro took the loss for Bainbridge, surrendering seven runs on one hit over one and one-third innings, while striking out four. Wynn threw three and two-third innings out of the bullpen.

Disappointed in their first game, the Bearcats took back the field and attempted to make a comeback in the second game of the afternoon. However, they narrowly lost 5-7 to a resilient Cairo.

Cairo scored an additional two runs in the second inning, before Bainbridge finally got a run on the board in bottom of the third inning.

Kell Donaldson was first to hit in the bottom of the third, where he was walked. Clayton then stepped up to the plate and hit a fielder’s choice ground ball, which led to the force out of Donaldson.

Wynn was then walked, moving Clayton to second base.

Chris Cooper hit a single to left field right before Parker stepped up to bat again. Parker was hit by the pitch, allowing Clayton to score.

With only one out, Owen Richards entered the batter’s box, where the pitching was wild.

These wild pitches, gave Wynn the opportunity to score, along with Cooper.

Aiden Velasquez was then walked, giving Bainbridge one last run in the third inning and bringing the score to 4-6.

Cairo scored their final two runs in the top of the fourth, while Bainbridge played steadily until the bottom of the fifth.

With two outs, Richards hit a double that landed him on second base. Velasquez then hit a single and reached second base on an error by Cairo’s third baseman.

Cain Worthington was the final player up to bat. During his at bat, a wild pitch allowed Richards to score.

Clayton took the loss for Bainbridge, allowing four hits and six runs over three innings, while striking out five and walking zero.