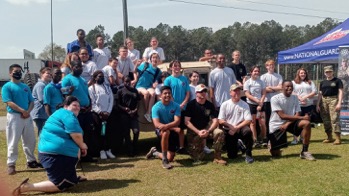 BHS JROTC smiles after participating in the Bataan Death March earlier this month.

The Bainbridge High School AFJROTC participated in a Bataan Death March commemorative march on March 13, the weekend before last. Normally, they host it locally, with the students walking 14 miles at the Earle May Boat Basin and it’s nature trail. This year was different, with Decatur being invited to Lowndes County to participate alongside the Georgia Army National Guard and Tift and Thomas County JROTCs. They began at 8:00 in the morning and finished at noon, walking the 14 miles on a 1.4 mile loop around the Lowndes School Board, high school and football stadium.

The AFJROTC has been busy with other things as well, with each class working on a community service project for the sesmester. Alpha flight is working on a fundraiser for the Humane Society; Bravo flight is working with the Friendship Houses of Bainbridge and Donalsonville; Charlie flight aided in the repair and pressure washing of several buildings in Donalsonville earlier in the month; and Delta flight held a car wash in order to purchase some new picnic tables for the Boat Basin, with the remaining tables to be assembled by Delta and the school’s construction class.

In addition to praising the students, Morehouse put out an invitation for any retired Air Force officers looking to work with the BHS AFJROTC, as there is now an opening. He can be reached by phone at 229-248-2268, and by email at smorehouse@dcboe.com.