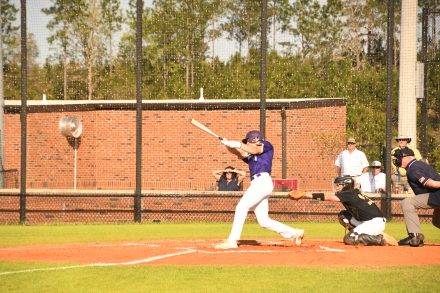 Quayde Hawkins singles on a pitch during the baseball game.

The Bainbridge Bearcats Baseball team took on Thomas County Central in a doubleheader on Friday night, where they came out victorious in both games.

The Bearcats were on fire in the first game of the night, winning 15-7.

The Bearcats scored their first run of the game in the second inning.

Colton Harrell reached first on a dropped third strike. Bo Smith then stepped up to the plate and doubled on a ball to left field, bringing Harrell home.

One run behind, TCC didn’t stay down long, as they brought in two runs during the bottom of the second inning.

Looking to take back the lead, the Bearcats came out swinging in the top of the third.

Michael Conder tripled on a fly ball, before Quayde Hawkins stepped up to bat.

Nolan Barr then hit a single. Following his hit, Will Beckham was walked, loading the bases.

Josh Beachem stepped in as a courtesy runner for Beckham, as Harrell took the plate again.

While waiting for the perfect pitch, Hawkins scored on passed ball. Harrell then hit a double, bringing in Barr and Beachem and giving the Bearcats a 5-2 lead.

Following a change in Cairo’s pitching, Connor Pointevint was walked before Ryals Burch singled on a line drive to center field. Conder was then walked, bringing home Smith to score.

With a 7-2 lead under their belt, the Bearcats continued to dominate in the top of the fourth, scoring two more runs.

Beckham hit a single, before courtesy runner Beachem took his place on base. Harrell then hit another double fly ball, advancing Beachem to third.

TCC got back on the board in the bottom of the fourth, scoring four runs, narrowing the gap to 6-9.
The Bearcats returned with four runs of their own.

During the inning, Hawkins scored on an error by Cairo’s third baseman. Soon after, Harrell grounded out, but not before he gave Barr the chance to score as well. Smith then hit a single, bringing home Beachem.
TCC scored one final run in the bottom of the fifth, before the Bearcats got their final two runs in the top of the seventh.

Beckham singled before Harrell tripled on a fly ball to right field. McCullough brought in the final run by singling and scoring Harrell.

Barr was credited with the Bearcat victory, surrendering one run on two hits over four innings, while striking out three and walking one.

Green took the loss for Cairo, allowing five hits and seven runs over two and a third innings, striking out three and walking one.

The second game of the evening was a nail biter with Bainbridge only winning by two runs, 6-4.

TCC was ready to claim a victory and came out strong in the bottom of the second inning, scoring four runs.

The Bearcats finally found their footing in the top of the fourth.

The Bearcats looked to catch up in the bottom of the fifth, scoring another run.

Hawkins singled on a line drive, before Barr was hit by a pitch. Dewey Brock then singled on a bunt to Cairo’s third baseman. With bases loaded, Harrell was walked, bringing home Hawkins’ courtesy runner, Clayton.

The Bearcats finally caught up in the top of the seventh.

Smith then stepped up to the plate hitting a fielder’s choice and scoring Barr.

Headed into extra innings, the Bearcats took the final lead in the top of the tenth.

Burch singled on a line drive. Godwin was then walked, along with Conder and Hawkins, scoring Burch. Barr was walked after Burch scored, giving the Bearcats a 6-4 lead.

Harrell earned the win for the Bearcats, allowing zero runs on zero hits, striking out six and walking one over four and a third innings.