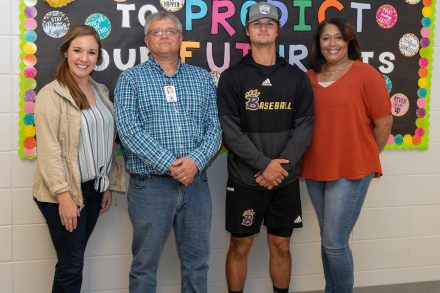 Bainbridge High School senior Nolan Barr was recently awarded the Georgia Department of Education Award of Excellence for the first time in the school’s history.

This is awarded annually to a student that deserves statewide recognition for their years of hard work and achievement. The DOE honors Georgia High School seniors with disabilities who have had academic and or extracurricular activities as shown by: earning a scholarship to a four-year, two-year, or vocational technical school.

Barr is hearing impaired, but Cochran said that he has always been a hard worker in the classroom and on the baseball diamond.

“He has never allowed his hearing to affect his goals or taken any special treatment due to his hearing loss,” she said. “Nolan self-advocates for his loss despite having accommodations provided for him and I, along with his parents have always treated him like just one of the other students.”

Barr said he looks at Cochran as a second mother, as she has helped him during times when he couldn’t understand what a teacher was trying to communicate.

Cochran feels the same about Barr and said he has been a pleasure to work with and she sees a bright future ahead for him.

Along with this award, Barr has also received a scholarship to play baseball at Andrew College and a scholarship from Quota Atlanta provided through ProvisionBridge.

Barr said with these scholarships, he hopes to get his AA at Andrew. He then would like to see where baseball takes him, but if that doesn’t work out, he would like to attend a major university and study ag engineering.