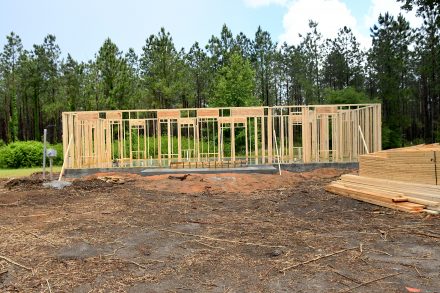 The lots have already had foundation poured, along with general framework now going up.

As more and more large businesses move to Bainbridge, the issue of housing has grown along with the city. With so many new part-time workers and permanent residents moving in for these projects, Bainbridge has found itself with a short supply of available housing. That’s not to say nothing is being done about it, as some realty and construction companies seek to capitalize on the demand. One such partnership is the duo of ERA Simpson Realty and Salem Construction, which have begun development in the East River subdivision.

Charlie Salem, founder of Salem Construction, and Lesley Taylor, of ERA Simpson, both spoke to the Post-Searchlight about the project. Taylor had moved away from Bainbridge for years, before moving back around the time of Hurricane Michael to help with her father’s health.

“I just saw the Bainbridge I love during the hurricane, pulling together…” According to Taylor, the expansion of downtown and the current expansions at Danimer and the A-1 Roof Truss project were part of her inspiration for the East River project. “Michael Smith was one of my high school friends,” she said (Smith is COO at Danimer Scientific). “I have been really following Danimer because of my friendship with Michael. And I knew some things were coming down the chute…”

“My initial plan wasn’t to build new construction, that wasn’t my main goal,” he said. “Every time I came back to Bainbridge and I saw the condition people were living in, it hurt seeing them in such conditions,” he said.

His initial plan was to purchase and renovate houses, before eventually expanding to the current 16 lots, with both renovated houses and new houses currently under construction.

“The main thing is having a place to raise a family… Along with that, companies like Danimer and A-1 are coming and don’t have places to house their employees, so we aim to fill that void.” Salem continued, “I want to invest in the area I grew up in. There was a shortage of new construction in the area, and that can kind of limit how many people want to move here… The joy of a couple owning their own home, it can have an effect on their own pride, being a homeowner.”

“We all need to do our part to keep our little part of the community clean,” Taylor said. “We want to keep our city something to be proud of.”

According to Taylor and Salem, they are both working on organizing seminars for new homeowners and those with credit issues, namely on how to manage credit, mortgages and similar issues when it comes to home ownership.