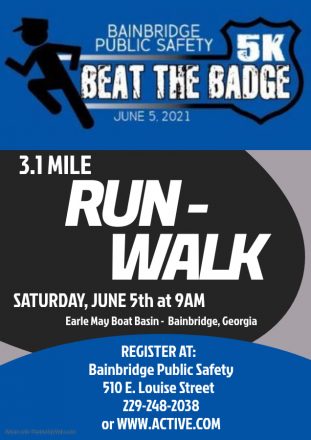 Officers, kids and adults will take part in a 5K and one-mile fun run this weekend to raise money for Kids ‘n Kops.

This past April, the YMCA held their Couch Potato to 5k training program. Those practice runs were held in preparation for the upcoming Beat the Badge event being held by BPS this Saturday, with a free mile-long fun run for kids, followed by a 5k run for adults.

Captain Tim Mixon, director of Kids ‘n Kops, and Julie Harris, BPS Director of Community Relations and the event director, both sat down with the Post-Searchlight to discuss the upcoming event. Originally, the event had been planned for May of last year, in association with the YMCA, but the pandemic shut those plans down.

“Bridgett Harrell is the one that contacted me,” Harris said, “and said ‘Hey, we’re doing a Couch to 5k training program, but we don’t have a 5k to run. Do you think public safety will do a 5k?’”

The mile-long fun run was added in later.

Harris elaborated, “But then in addition to the 5k, we wanted to make it a Kids ‘n Kops event, so we introduced the one mile fun run, so that we could get kids involved and not just have a 5k. Because most kids don’t run 5k.”

Officers will be participating in the race to both challenge and provide encouragement to the kids.

“We are gonna have some kids that are gonna be like ‘Run run run run!’ And if we have an officer that says ‘Hey, can you beat me to the finish line?’ they’ll challenge the kid… but some of these little kids, it’s gonna be all they can do to finish… And some officers are gonna have to bring up the rear and make sure we’re not going to leave any kids behind,” Harris said.

“It’s for everyone to have fun,” Mixon said. “Like, the whole thing is ‘Beat the Badge,’ let’s just get out there and run with the cops, intermingle with everyone.”

Mixon and Harris both thanked the event’s 60+ sponsors, who made it possible for the fun-run portion to be free to kids.

There are currently 100 people, comprised of both kids and adults, registered for the run. On-site registration will be held at the Smokehouse at the Boat Basin, while online registration is currently available at active.com. While the fun run is free for kids, parents/guardians must still sign a waiver in advance; for adults, the 5k run costs $20, or $25 if they wish to receive a run shirt. Funds raised here will go to future Kids ‘n Kops community events, including the upcoming Fun Day. The fun run is set to start at 8:30 and will start at the Smokehouse, while the 5k will be at the nature trail at 9:00. Those that plan to register at the event are encouraged to show up 30 minutes early.