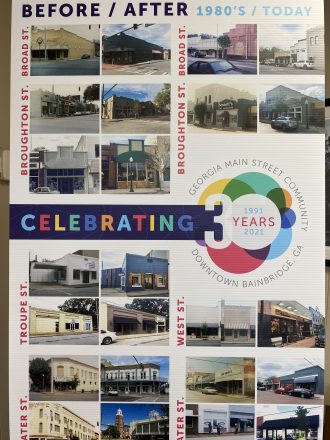 DDA Director Amanda Glover created a graphic of side by side comparisons from today to the 1980’s.

Downtown Bainbridge has a lot to be proud of, as they recently celebrated 30 years of being a Georgia Mainstreet Community.

Being a Georgia Mainstreet Community has provided the framework for downtown’s revitalization, according to Downtown Development Authority Director Amanda Glover.

In order to be considered a Mainstreet Community, the city has to meet four points: organization, promotion, design and economic development.

As far as promotion goes, Glover pointed out the new logo and directional signage the City has put out throughout town.

“We’ve become more professional in the way we design our ads and the way we project ourselves to the community,” she said.

Events have lended themselves to meet both the organization and promotion category, while economic development has been met through applying for state grant programs and encouraging property owners to utilize them as well.

These four points have been the backbone of creating what Downtown Bainbridge is today.

However, this revitalization still wouldn’t be possible without the public.

Glover believes one of the real kick starters of the being a Mainstreet Community was when the Bon Aire was bought in 1999 and converted into residential living.

It was only one of the many changes she would see throughout her career.

“I think the component of adding residential aspect to downtown, along with a variation of retail has been very instrumental,” she said.

While Glover believed in the vision of what Downtown could become, she also applauds the Mayor and Council for being receptive and transforming with the times.

Glover referenced how City Council amended the alcohol ordinance in order to allow visitors and residents to have open container in the Central Business District.

“As a local government the way they have accommodated the growth we are seeing to be able to make it work has been great,” she said.

With the success found Downtown, Glover now has her sights set on the north end of Broad Street and West Street, hoping to make it just as popular in the next 30 years.

“We are slowly starting to etch that way,” she said. “We have Jennifer Cannon with the Elysian Tea Room, the new veterinarian, the Hook and Ladder, the playground and Jennifer has another cool project she is planning.”

This includes the existing businesses such as the car wash, Healing Hands and Mad Rose.

“That center portion is a goal of the DDA to reach,” she said.

Glover said she has already begun seeking out funding options or grants to apply for in order to make the area desirable for retailers.

And, Glover knows a thing or two about selling property. Since becoming a Mainstreet Community in 1991, there have been $12.2 million in property sales downtown, excluding the years 1994-1996.

There has also been $30.8 million in public and private investment Downtown since 1991, with only more to come.

“We’ve got ScoopS, KGD Produce and the Bridge Nutrition coming,” she said.

These businesses are a result of being designated a Rural Tax Zone.

Bainbridge was designated as Rural Tax Zone in 2018, and since then there have been a net of 11 new businesses with 63 jobs created with 61 properties sold for approximately $4.1 million.

“It’s decreased our vacancy rate from 24 percent to 8 percent now,” she said. “Around the square, there’s maybe one property.”

Glover has loved seeing the investment and the transformation throughout the past 30 years; she remembers when Diablo’s was once a recruiting office for the Army in the 80’s and 90’s.

She hopes everyone will join her in reminiscing and viewing a video created by the DDA to see the amazing transformation that has taken place and continue to stand by their side as they work to tackle new projects in the upcoming years.

As the school year closes and summer vacation kicks in to full swing, various summer camps are offered to local... read more