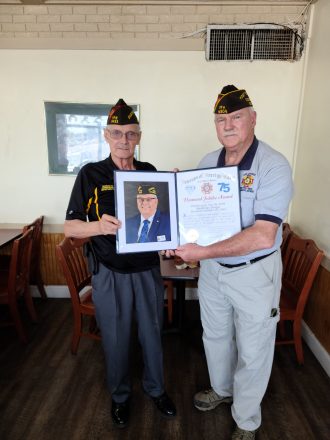 Commander-in-Chief Harold “Hal” Roesch, II commended the chapter through a letter of recognition, allowing District 8 Commander Charles Jackson to present on his behalf.

“The members of VFW Post 4904 are a pillar of support for Bainbridge, Georgia,” Roesch penned. “Year after year, you have provided superb public service to others. You provide an invaluable network of service to those who have borne the battle, as well as to their families, and you advance the health and well-being of those who bear the burden of defending our nation and our way of life.”

Roesch acknowledged that the Post’s continued dedication is a testament to their motto, “No One Does More for Veterans.”

Upon the conclusion of Roesch’s letter, Jackson spoke to Post 4904.

“A Post Anniversary is a celebration, not just for the Post, but also for the entire VFW and its Auxiliary,” Jackson said. “I’d like to say 75 years seems like yesterday, but I have to recognize the fact that we are talking about nearly a century; a lot has changed. The world back then was entirely different from the one we live in today. Yet, some things remain the same.”

Jackson was referring to the men and women who served and fought together, before coming home to Bainbridge to establish Post 4904 and develop a comradeship.

“That’s why this Post was mustered- to honor the sacrifices of those who put their lives on the line- and to remember and to celebrate those lives,” Jackson said. “The VFW Post is a very important part of every returning GI’s life.”

Jackson said that today the VFW continues to support its veterans in its 121st year through the Forever GI Bill and its National Legislative Services department that testifies on Capitol Hill on behalf of America’s men and women in uniform, and its National Veterans Service Department, which assists veterans with their transition back to civilian life.

Jackson referenced the variety of programs the VFW is known for, such as its 1 Student Veteran.

The program helps any veteran experiencing problems accessing their education benefits to get specialized help from a VFW staff member, who can intervene with the VA on behalf of the veteran or recommend other courses of action.

The scholarship was launched in 2013 and has been a life line for student veterans. Scholarships of up to $5,000 are awarded to each recipient and veterans can reapply each semester.

Through the years, the VFW has made a huge difference in the lives of many veterans, Jackson reminded the Post.

“This momentous occasion should not stand for just 75 years behind it; it should stand for the next 75 years as well,” Jackson said. “it should point the way to the future and carry a story of commitment to those who are serving today and those who will serve tomorrow.”

Jackson then congratulated the Post and presented Commander Hill Yates with the plaque.

Yates has been a member of the VFW since 1976 and been a commander since 2001. He is grateful to receive this award on behalf of the VFW for Post 4904 and asks any veteran to stop by and join their post and comradeship.

Downtown Bainbridge has a lot to be proud of, as they recently celebrated 30 years of being a Georgia Mainstreet... read more