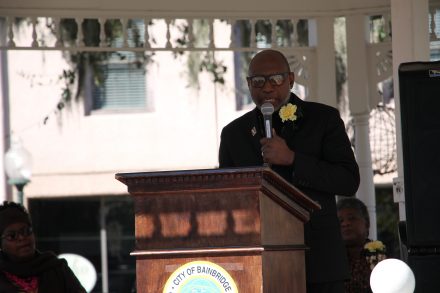 The group’s founder and Executive Producer, Rahn d. Fudge, a 1979 graduate of Bainbridge High School who lives in San Francisco, Calif., and who’s returned each year to his hometown for the past nearly 20 years during Black History Month to spearhead local events, adds that the group’s inaugural Juneteenth celebration will also center on encouraging local residents—especially African-Americans—to get tested and vaccinated. “This is a perfect opportunity for local residents to do their part to both learn about forgotten black history and to help lead the way out of a worldwide pandemic that has devastated the local community at-large and, in particular, the black community which has been disportionately affected by COVID-19”, says Fudge. “Let us also free ourselves from this deadly disease that continues to shackle our communities”, he reiterates.

The local event is called the Phoenix Affaire “Juneteenth Jubilee!” and it will happen in sync with other Juneteenth observances and celebrations nationwide. It will take place from 10am until 4pm on the private grounds and property at 209 Whigham Dairy Road in Bainbridge.

Nearly all 50 states in America now recognize and celebrate Juneteenth on (June 19th) which is when the last enslaved African-Americans in Texas were finally told they were free in 1865—more than two years after the Emancipation Proclamation freeing all slaves in the Deep South became law in 1863. It’s predicted that more American workers than perhaps ever in history will take the day off the Friday before Juneteenth ( which falls on a Saturday this year) in observance. And, in nearby Thomasville, Georgia residents there will mark the special day with a parade and festival as the so-called “Rose City” has now declared Juneteenth an official city holiday.

For more information and details or to volunteer and support the Phoenix Affaire’s first-ever Juneteenth event in Bainbridge, please call Ms. Betty Fudge-Biggles at 1.229.205.0218

With the start of summer comes the search for entertainment opportunities. Never has this been truer than after a year... read more