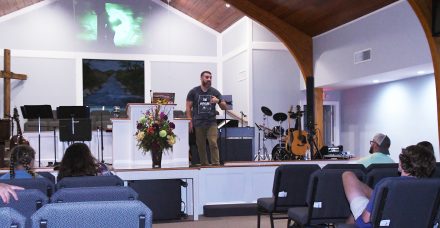 This past Thursday night, Morningside Baptist Church, with assistance from Corey McMickle with One Ministry, held the first of three youth rallies, which are scheduled to go to Saturday night. Kids and teens were first treated to music by the church band, followed by a sermon delivered by Tanner Ethridge. The overall message of the rallies is unity, with Thursday’s message focusing specifically on unity with Christ, Friday’s focusing on unity among believers, and Saturday focusing on unity for the world.

Ethridge is currently a student pastor at Thorington Road Baptist Church, and is friends with Jeremy Adams, Morningside’s youth pastor.

“Jeremy and I are good friends. He and I served together at a church in Abbeville, Alabama, and we’ve known each other for a long time,” he said.

Friday’s message about unity among believers was, according to Ethridge, aimed at cutting down on strife.

“I’ll challenge them tomorrow night to forgive others in the room. I know anytime we come in, we’ve got baggage… so if there’s strife, conflict, then I’ll be inviting them to deal with that tomorrow night.” Ethridge said Saturday’s message of unity for the world would be discussing outreach, and the nature of Christian unity, “The idea that our unity as Christians with Christ, is not really for our benefit. You know, ultimately, Christ came for a benefit bigger than himself.”

“I’m kind of on the same boat as Corey,” Adams said, “We want to try and get churches to start working together, and we’re starting with the youth, since we’re youth pastors. We think it’ll start from the ground up, the kids up, so that’s how we’re doing it.”

The next scheduled event for the youth with One Ministry is a water day next month on Lake Seminole, complete with an inflatable blob.

This Sunday, thousands gathered at the Earle May Boat Basin for the city’s Star-Spangled Flint 4th of July celebration. Perhaps... read more