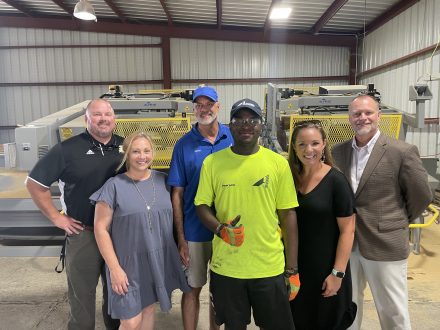 Recent Bainbridge High School graduate, Johntavis Pearson, 18, is the first post-grad student to accept a job at A-1 Industries, while he waits to be deployed for basic training.

Pearson said he was contacted by faculty members at BHS, who informed him of the opportunity to have sit down interviews with both Taurus USA and A-1 Industries.

The interviews came as a result of an industry immersion tour the school recently partook in, where they connected with both industry managers. The school had suggested several students to the mangers and they agreed to interview them.

Pearson was one of the students.

He said he first met with Taurus, where he was asked how he knew about the company and other basic interview questions. He then immediately went to A-1 Industries and had a one-on-one conversation with Vice President of Operations, David Blenker.

During the interview, Pearson informed Blenker that he had also enlisted in the National Guard and would be deployed on September 7 for basic training in Oklahoma, where he would then spend nine weeks.

Blenker said he understood, but saw Pearson’s work ethic and offered him a job.

Pearson said he previously was working with his grandfather. The duo would take on any odd jobs, including yard work and woodworking. Person said he also took construction classes at BHS, which prepared him for the job at A-1.

Prior to beginning his first day, Pearson underwent the Predictive Index Personality Assessment, which he said did interest him.

“I liked that it showed them what type of person I am,” he said.

Upon seeing his results, Pearson began by picking wood to go into the saw. He learned the different type of wood grades and other contributing factors before he was moved up to operating the saw.

Pearson will definitely have the opportunity to move up in rank when he returns from basic training. He has been promised his job will still be there when he returns.

Pearson said he is thankful for the opportunity Blenker gave him and appreciates the high school for preparing him for this day.

He encourages all of his classmates and all other individuals looking for a job to apply at A-1 Industries.

He said the culture at the company really provides a welcoming environment and that there are a lot of good, hard-working people, who surround him every day.

This past Thursday night, Morningside Baptist Church, with assistance from Corey McMickle with One Ministry, held the first of three... read more