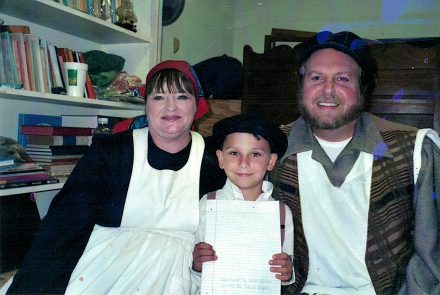 Thaddeus Nifong passed away April 20, 2021. Nifong not only worked as a teacher at Bainbridge College, but also as the manager of the Bainbridge Little Theater. He additionally taught at Gwinnett Technical College, and had recently performed in several plays in Tucker, Georgia. Having lived all across the Southeast, from Plant City, Florida, to Bainbridge and all the way up to Atlanta, Nifong made countless friends over the years, many of whom gathered at the Bainbridge Little Theater on Saturday, July 31, for a tribute to his life.

Many individuals who had worked with Nifong performed songs from plays they had done with him, while others gave their personal thoughts. A reception followed that evening at The Venue. Michael Inlow, one of Nifong’s friends and the director of the tribute program, sat down with the Post-Searchlight to talk about both his relationship with Nifong, and the tribute.

“Martha Mobley was actually the one who got Thad to come,” Inlow said, recounting how he met Nifong, and how he ended up in Bainbridge. “She saw him at community chorus, and she went down to a theater called Cast… and she went down there to recruit somebody to come do our children’s theater program, we wanted to get that going here in Bainbridge.”

“Martha, Thad and myself, we all met some years ago, when we did ‘Annie Get Your Gun.’”

This marked the beginning of Inlow and Nifong’s friendship, and working relationship.

“We’ve done probably over 40 musicals together,” he said. “I was always the music director, and he’d be the artistic director… We were personal friends, and he was one of my best friends, and we just wanted to do something to honor his memory here.”

“I thought it was a great tribute to him,” Inlow said. “Kind of a testament to him, and how he touched all these people’s lives through art and music theater.” Nifong had moved to Atlanta four years ago, and upon his passing, the service was held in Atlanta. According to Inlow, few of his friends had been able to make it to Atlanta, and there had been nothing held here in Bainbridge. Multiple friends and associates of Nifong, most of whom had worked with him in plays prior, came to the Saturday tribute, many even coming from as far away as Largo, Florida.

“Most of the people that drove said ‘I’m glad I made the trip.’”

In addition to the tribute, Inlow said the Little Theater plans on dedicating its upcoming season to Nifong’s memory. A memorial scholarship has also been set up, with donations being provided at the tribute, and an upcoming fundraiser show is also scheduled, the proceeds from which will go to the scholarship. The Thad Nifong scholarship will be awarded to a high school senior looking to pursue a degree in theater.

According to Acts 2:17, “…your young men shall see visions, and your old men shall dream dreams.” Cole Bulger certainly... read more