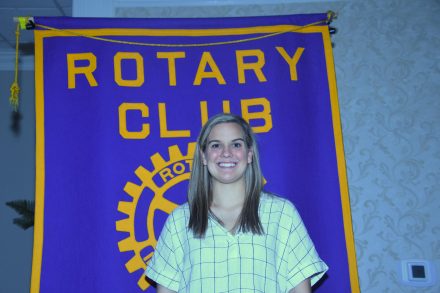 Kelsey Harrell speaks to Rotary Club on Tuesday afternoon about how she got her start selling produce, which led her to open KGD Produce.

At the weekly Bainbridge Rotary meeting, Kelsey Harrell, co-owner of KGD Produce, spoke on the history of the business and how it began.

Initially, it began as KC and the Produce Stand four years ago, with Harrell, still a student at Mercer, initially partnering with Chelsey Jones.

“We literally had squash, tomatoes and peaches, and some okra,” Harrell said. “That’s literally how we started.”

The pair also sold boiled peanuts, and quickly sold out due to not having a large pot.

According to Harrell, the two businesses that sold fresh produce had closed, which led to the idea of selling produce during the summer.

“I was like ‘Well, I don’t know anything about produce, I didn’t grow up on a farm, but I’m willing to try.’”

That first summer, Harrell and Jones partnered with Long Farms for their produce, and found success.

However, Harrell did not originally intend on continuing the business further, instead planning on doing Study Abroad the following year. However, those plans didn’t come to fruition, and Harrell would end up working out of Calhoun Street that summer, with another produce shop having moved into their old location.

As the third year came around, Harrell and Jones would part ways, with Jones graduating and pursuing a different job. This was when Harrell would begin working with her current business partner, Delaney Mueller.

“She is from Fayettville, Georgia, which is just south of Atlanta. So you want to talk about nobody knowing produce?” she joked. The two had to relocate again, and still found success.

During her senior year at college, Harrell contemplated moving on to another job after college.

“I thought about going, like, Corporate America. You know, graduating, going and getting a job, and not coming back and doing this,” she said.

However, she still chose to return to business in 2020, where the idea for a full-time business set in.

“That’s when we had that spark of ‘Hey, something full-time could work. Bainbridge needs this.’”

They began preparations earlier this year, and sold produce and boiled peanuts through the summer, before closing three weeks ago. KGD Produce officially opened for business Tuesday, September 7, 2021. They are located at 306 E Water Street, and provide year-round produce and Georgia-grown products.

When a person thinks of the crops and produce Georgia is known for, one thinks of corn, peanuts, cotton and... read more