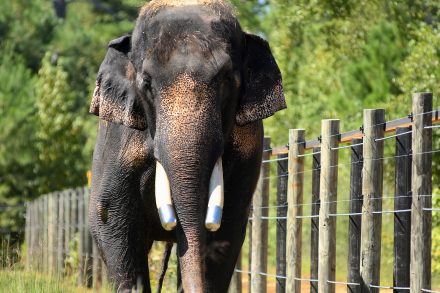 Bo, a bull Asian elephant,retires from the circus life to an elephant sanctuary in Attapulgus.

Thursday afternoon was a huge day for Elephant Refuge North America and Elephant Aid International founder Carol Buckley, as they welcomed their first elephant, Bo, to his new home in Attapulgus.

Bo, a 34-year-old male elephant, arrived at approximately 1 p.m. with his owner, George Carden and handlers. Although hesitant at first, Bo eventually stepped out of his trailer, thanks to some bananas, and into his new seven-acre habitat.

Bo came to the refuge from the George Caren Circus, where he has been part of the Carden family for nearly 30 years.

Being considered a member of the Carden family is what led Bo to the refuge.

“Bo is like my child,” Carden said. “He’s with me 24/7, except with a child you can find a babysitter. With Bo, I would’ve had to drive to Georgia over 800 miles every time.”

Carden revealed Bo never would’ve been sent to the refuge had it not been for Buckley.

Buckley sent Carden photographs and videos of the 850-acre natural habitat refuge she had designed in Attapulgus and talked to him over the phone about the endless possibilities Bo could have there.

“I just hit it off with her and fell in love with her as a person over the phone,” Carden said. “It’s an honor to come here and I wanted to come and see Bo off, as I have some other female elephants possibly in the future.”

At only 34, Bo is in the prime of his life and Carden knows sending him to a refuge at this age is not the norm for the industry, but he felt like Bo deserved a better life.

Carden explained that throughout Bo’s life he’s only had four handlers, one of which was Carden’s sons, who trained Bo for 12 years.

Following his 12-year stint with Bo, Carden’s son left him back in the care of his father.

However, Carden said he is now 70-years-old and has had a hip and double knee replacement and he didn’t want to work Bo again.

“I decided what was best for this elephant was to call this lady (Buckley),” Carden said. “Bo had sat for a year-and-a-half and I couldn’t get any of his previous trainers and it wasn’t fair to him. I made this decision for my animal, and I felt like the best thing for my animal would be to let him live his life here.”

Carden kept true to his word and called Buckley promising that Bo would soon be joining her in Attapulgus.

“I called this woman and promised her I would never lie to her, steal from her and would always keep my word.”

“I would’ve never imagined,” she said. “He’s in the prime of his life and has another 35 years easy. I was thinking ‘how could this be true?’”

But, Buckley knew Carden wanted was best for Bo, and the refuge was the answer.

Upon stepping out of the trailer, Bo began exploring and soon wandered away.

“I’m always curious to see how the elephants are going to react, but to see him after 15 minutes, walk away and go on the pathways by himself is great,” Buckley said. “It’s a good sign.”

Although tearful, Carden and his assistants are happy for Bo.

“He’s not going to work again, so why not give him the life he deserves,” Carden said. “My son is super upset with me, but I did what is best for Bo, and we are happy to be part of this organization.”

Carden also informed Buckley that in the next few years four of his female elephants will need a place to call home, and he is 99% sure they will be able to call Bo’s home their home as well.

Buckley was thrilled to hear this and believes this, along with the retirement of Bo will set a new precedent for how performing elephants can live out their lives.

Although the refuge is private and allows elephants such as Bo to live out their lives peacefully, those interested can follow Bo’s progress or donate to Bo’s home campaign by visiting https://elephantaidinternational.org/bo-media-page/.