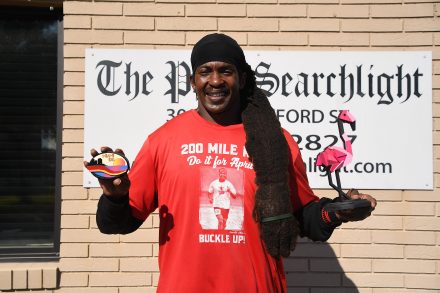 Harold Allen holds up his handcrafted Flamingo Trophy from the Miami 100 Ultra Marathon and his new belt buckle.

Bainbridge runner Harold Allen added another run under his belt this past weekend, claiming first in the Miami 100 Ultra Marathon.

The run began first thing in the morning at 6:00, with three different race categories: the Miami 100, the Miami 125 Challenge, and the Ride the wave 50k. Allen finished the Miami 100 in 23 hours and 45 minutes.

According to Allen, the heat caused several runners to drop out, while he was the only runner without a team: “They had crews, but I was the only solo runner. What I mean by crews is, people came down with them to pace them, if they need anything they help them.”

Without a team to help pace him, Allen only made brief rest stops along the way.

In addition to this, Allen described the downtown Miami traffic as an obstacle he had to mind as well.

“You can’t just run through the middle of the road, you’re gonna get killed,” he said.

“That’s one of the cool things about Ultra running, you just learn to embrace the sport for what it is.” He continued, “I was still feeling good at the end, but he was a total wreck. I could’ve easily been selfish and at the last little part just sprinted, but what would’ve been the good out of that?”

“It feels good just to be able to inspire people,” Allen said. “It isn’t easy, but at the end it’s well-deserved, and you’ve got to earn it.”

Allen still has no plans to stop running, with a possible run for Domestic Violence Awareness Month planned for October. “They want me to help them promote it from the running perspective,” he said. “They’re going to put on the event themselves, they just want me to assist with the running part.” A concrete date has yet to be announced for the run, which will be held at Cheney Griffin Park.