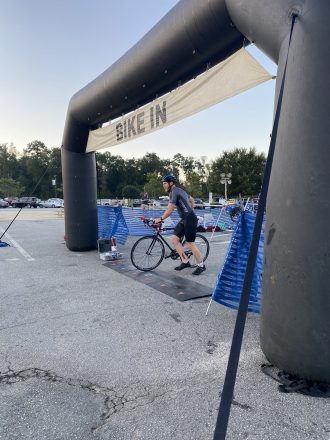 A competitor in the Sprint on the Flint Triathlon held over the weekend, hops on his bike and begins his 10-mile ride before running a 5K.

Over the weekend, the City of Bainbridge, in conjunction with the Bainbridge Decatur County Recreation Authority and the Convention and Visitor’s Bureau, held the 5th annual Sprint on the Flint Triathlon, where more than 105 competitors took on the ultimate swimming, biking and running challenge.

CVB Director Crystal Hines said she was extremely pleased with the turnout, especially considering some are still recovering from COVID-19. The triathlon brought visitors from Alabama, Florida and cities in north Georgia, such as Atlanta, while it also saw five local competitors.

“It’s the most people we’ve ever had from our town compete,” Hines said.

All competitors were tasked with a 400- meter swim at the Boat Basin, before completing a 10-mile bike ride and 5k run.

“They came out of the Boat Basin up Shotwell Street, turned on West Street, all the way to Country Club Road, cut onto Faceville Highway and then back down Old Quincy Highway and back to the Boat Basin,” Hines said.

Following that grueling course, competitors were treated to baked goods and refreshments provided by Walmart, while they awaited the results.

Two of Bainbridge’s competitors placed in their age group.

Hines was proud to see Bainbridge represented and reminds everyone that the Sprint on the Flint is a great triathlon to try for those just getting involved, because they offer a relay team option, meaning no one person has to do all three activities.

Hines said this year a dad and his two daughters used the option to compete in the race.

“The dad swam, while his daughter biked and youngest daughter ran,” Hines said. “It was a great family activity for them.”

Hines would like to thank all the sponsors and volunteers who made the weekend possible, including the City of Bainbridge, Visit Bainbridge, the Bainbridge Decatur County Recreation Authority, Inland and Sio’s.

This past Saturday, the Bainbridge Middle School and High School cross country teams, along with the Grace Christian Academy team,... read more